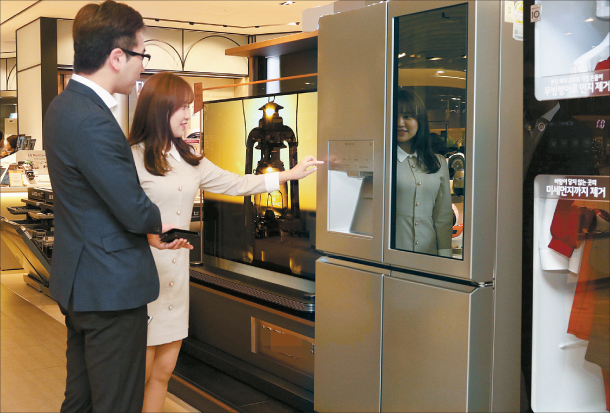 A couple models pretend to shop for a refrigerator at a Shinsegae Department Store in the household appliance section. [SHINSEGAE DEPARTMENT STORE]

Sales of luxury goods and household appliances at department stores increased in March, compared with last year, as engaged couples may have already purchased products for married life despite having to push back the wedding date.

Overall sales at Lotte Department Store from April 3 through April 7 dipped 15.4 percent compared with last year’s promotional period, which took place earlier in the year, from March 29 through April 2. Sales of women’s fashion shrank 34.6 percent. Men’s sports and general merchandise both dropped by about 17 percent.

“Couples that had plans to tie the knot in April and May purchased jewelry, like rings and watches, and household appliances, using Lotte’s wedding mileage system,” said Lotte Shopping spokesperson Moon Ho-ik.

Lotte’s “wedding mileage” program allows couples to receive credits for their purchases made during the nine months since signing up for membership.

Sales of luxury products rose despite the depressed consumer sentiment in recent months, as consumers tend to purchase more expensive products at brick-and-mortar stores rather than migrating to e-commerce, according to Lotte.

Declining fears of the coronavirus outbreak have also led couples planning to get married in the fall to visit the department stores as they prepare for their upcoming weddings, Lotte said in a statement.

Shinsegae Department Store similarly saw a jump in household appliance sales from people in their 20s and 30s.

Sales were surprisingly helped by soon-to-be-married couples who delayed their weddings amid the social distancing campaign but were unable to push back the contracts for the houses they purchased, according to Shinsegae.

Couples typically purchase household appliances one or two months ahead of their wedding. Customers in their 20s and 30s accounted for 41.4 percent of all of those sales.

For Hyundai Department Store, overall sales dropped 12.6 percent on year during the promotional period, from March 3 through March 7. But sales of luxury products and home furnishings rose 5.3 percent and 8.8 percent, respectively.

The Korea Chamber of Commerce and Industry on Monday offered a gloomy outlook for the retail industry overall. The retail business survey index scored 66 for its second-quarter outlook - its lowest level since the survey began in 2002. Scores above 100 suggest improvements in outlooks, while those below 100 suggest a decline.

Department stores scored a 61 in the chamber’s analysis.