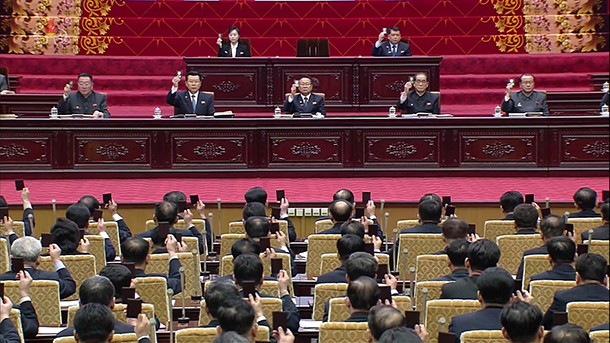 The Supreme People’s Assembly, North Korea’s Parliament, holds a meeting in Pyongyang on Sunday in this photo released by the Korean Central News Agency. [YONHAP]

North Korea held a plenary session of its rubber-stamp legislature Sunday, formalizing major personnel changes to its diplomatic and economic leadership after the country sealed itself off from the coronavirus pandemic.

According to the Korean Central News Agency (KCNA), a leading regime mouthpiece, hundreds of members of the Supreme People’s Assembly (SPA) gathered at the Mansudae Assembly Hall in Pyongyang for a plenary session on Sunday.

Presiding over the session was the regime’s nominal No. 2, President of the SPA Presidium Choe Ryong-hae. North Korean leader Kim Jong-un, who is not a member of the SPA, did not attend.

The session took place two days later than initially announced by state media, which earlier said the SPA would meet on Friday. No explanation was given for the postponement, though state media reported on Sunday that Covid-19 posed “some obstacles” to the regime’s activities. 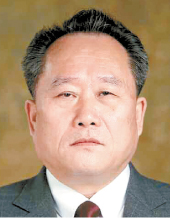 Meetings of the SPA, which has few real powers, are often used as occasions to formalize policy stances decided by Kim and his coterie of close aides.

Sunday’s session, however, proved relatively pedestrian by North Korean standards, suggestive of how the coronavirus pandemic has dampened the regime’s ability to grab global headlines amid the pandemic. A more substantive event took place on Saturday, when Kim presided over a Workers’ Party Political Bureau meeting that discussed antiviral measures to check the spread of the disease.

What was notable about the SPA session, however, were the formal announcements of personnel changes made to the State Affairs Commission (SAC), the country’s most powerful decision-making body headed by Kim himself.

Ri Yong-ho served as North Korea’s foreign minister and counterpart to U.S. Secretary of State Mike Pompeo as Kim engaged Washington throughout the past two years but was abruptly replaced with Ri Son-gwon in January as a deadlock continues in denuclearization negotiations.

Ri Su-yong, head of the international division of the North’s ruling Workers’ Party, was also believed to be sidelined after he was notably absent from an important year-end party Central Committee meeting last year when Kim announced he was no longer keen on talks.

Thae was the party chief for the munitions industry, the most important sector in the North’s planned economy, since 2017, but his profile appeared to have recently diminished along with the two Ris.

KCNA said the trio had been replaced in the SAC by Ri Son-gwon, Ri Pyong-chol and Kim Hyong-jun.

Ri Son-gwon is best-known in Seoul for his brusque remarks toward South Korean business leaders at a luncheon during the third inter-Korean summit in Pyongyang in 2018. His appointment as foreign minister in January was seen as a sign that the North was moving toward a hard-line approach to talks with the United States, and his ascendancy into the SAC was in line with his new rank.

Ri Pyong-chol served as a deputy to Thae in the Workers’ Party munitions department and is believed to be a key figure in advancing the regime’s nuclear and conventional weapons development in recent years. Kim Hyong-jun served as a former ambassador to Russia, whose promotion could suggest Pyongyang is seeking to diversify its foreign relations.

Both the SPA session and the Politburo meeting over the weekend suggest North Korea has been grappling with the pandemic, which threatens to overwhelm its decrepit health care system and economy.

While KCNA on Saturday claimed the country has been “maintaining very stable anti-epidemic situation,” it acknowledged discussions were made by the Politburo on “adjusting and changing some policy tasks … in view of the prevailing internal and external climates.”

At the SPA session, a decision was made to devote 47.8 percent of the total annual budget to economic development policies, compared to 15.8 percent going to defense spending. Notably, a law was adopted Sunday guaranteeing living stipends for discharged officers, showing the regime hopes to keep the military on its side if the situation takes a turn for the worse.

The spokesman for South Korea’s Ministry of Unification, Yoh Sang-key, on Monday said the series of political events in the North this weekend testified to the difficulties it faces.

“The [South Korean] government is of the stance that humanitarian exchanges and health sector cooperation [with the North] is basically needed, particularly given this situation where we need transboundary cooperation to deal with a non-traditional security threat,” Yeoh said.

Pyongyang, however, says it’s uninterested in dealing with Seoul. On Saturday, a KCNA commentary slammed the South’s Unification Ministry for being obsessed with unifying the peninsula by absorbing the North, while on Monday it claimed “not a single [coronavirus] case has so far been reported in our country.”