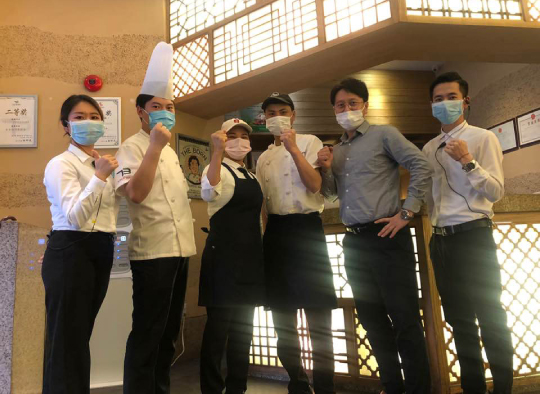 Jang Yun-jae, 40, second from the right, and his employees pose for a photo at his Korean restaurant in Shenzhen, China. [JANG YUN-JAE]

For Jang Yun-jae, 40, it couldn’t have been much worse. As a Korean businessman with two restaurants in Shenzhen, China, he was up against the Covid-19 outbreak, restrictions on foreigners in the country and growing international tensions.

Restaurants in Korea have been able to survive with innovation, such as catering for five-star hotels and make-it-yourself truffle gnocchi. No such luck for Jang. No amount of messing with the model could have helped his establishments.

His restaurants survived for other reasons. His employees stuck by him through the worst, and they committed themselves to their boss, even though he couldn’t be with them on site at times.

“Thanks to the employees, the restaurant should be able to survive until June,” said Jang, recalling all the events since the outbreak started. “I am grateful to them for standing by me like this.”

When the virus first began to spread in Wuhan at the end of January, even Shenzhen, which is about 1,000 kilometers (620 miles) away from Wuhan, could not escape the threat.

After the Lunar New Year holidays, the local government restricted restaurant operations. Jang’s restaurant was not exempt. He was forced to close his two locations for 50 days and could only hope that the government would not stretch the suspension any longer.

Jang was able to open his business again after those 50 days. But the troubles did not end there.

By the time that Jang reopened his business in early March, the virus was spreading in Korea, and the outbreak there was spiraling out of control. Many Chinese people were worried about getting infected by the Koreans traveling to China.

Jang recalled that some Chinese customers, worried about getting infected, would demand to know whether there were any Koreans eating in the restaurant. He said that these customers did not try to disguise their concern.

Noting the restaurant’s difficult position, Jang’s employees did not bring out the pitchforks. Instead, they started to work even harder.

Even without Jang’s prompting, the employees carried out all necessary measures to keep the business running smoothly. In order to receive clearance to keep a restaurant open, employees must confirm that they are healthy, and the restaurant needs to be regularly sanitized.

When Jang was forced into self-isolation, the employees immediately obtained a certificate confirming their health and started to disinfect the restaurant every other day.

While he was at home, employees told him to just sit tight, get some rest and not worry about the restaurant since they had everything covered. Save for one or two employees who expressed dissatisfaction, the employees also agreed to a temporary wage cut, something that Jang feels particularly apologetic about.

He struggled to make rent. Of the two restaurants that Jang owned, only one was qualified for a rent break offered by the Chinese government. He did not have much of a choice. Either he must cut employee wages or close down, and many restaurants in the area had to choose the latter.

Most of Jang’s employees were taken on after graduating high school and are now in their early and mid-20s. They don’t have much savings, but they understand the difficulties being faced by the restaurant and are willing to share the burden.

“I will make sure to repay them as soon as the situation improves,” said Jang.

“In China, right now, my employees are all that I have,” said Jang. “The danger in recent times is the mental exhaustion, so it is important to approach the problems optimistically and, together with the employees, work our hardest.”