Man busts quarantine to go to sauna - twice in 1 day

Man busts quarantine to go to sauna - twice in 1 day

A 68-year-old Korean man who recently returned from the United States could soon call a jail cell home after breaking self-quarantine to visit a sauna - twice on the same day. 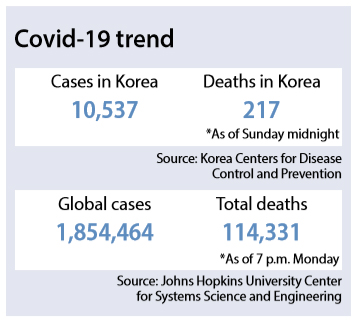 Police announced Monday that they charged the resident of Songpa District, southern Seoul, with violating self-quarantine rules and also filed for a pretrial detention warrant, warning that other violators would face tough punishments too if they wander off during their quarantine period.

It was the first time the police sought a pretrial detention warrant for a quarantine violator, though a slew of people are being investigated for similar violations and an Indonesian man was deported from Korea last week for lying about his whereabouts and leaving his residence.

The police warning came as the Korea Centers for Disease Control and Prevention announced 25 new infections throughout the nation Sunday, down from 32 Saturday and the lowest daily figure since cases began to soar in mid-February after a church in Daegu became a major hot spot.

By Sunday midnight, 217 people had died, up by three from the previous day, while 7,447 people had been declared fully recovered, up by 25 from the day before.

Of Sunday’s 25 new cases, 16 were traced to a foreign country. Among Korea’s 10,537 overall cases, 929, about 8.8 percent, have been imported from abroad, mostly from Europe and the United States.

According to police, the 68-year-old Songpa resident arrived in Korea from the United States last Friday and was told to self-quarantine in his home for 14 days, the incubation period of the virus. On Saturday at around 2 p.m., the Songpa District Office received a call from an acquaintance of the man, saying he had left his home.

The Songpa District Office called 112, the police number, for help, and police officers managed to track him to a nearby sauna 30 minutes later and escorted him back home. Hours later at around 7:35 p.m., the man was caught going back to the same sauna again, and police arrested him on the spot.

The Songpa District Office said the man agreed to enter a government-run self-quarantine facility in Gangbuk District, northern Seoul. Seoul police said Monday morning they decided to file for a pretrial detention warrant out of fear he may escape it.

A Songpa District official said Monday that the suspect claimed not to have a smartphone when he passed through airport customs last Friday, which was how he got away without downloading a self-quarantine app that all overseas arrivals are forced to download. The app comes with a GPS function that informs local government offices when users wander off from their homes with their phones.

As the government’s so-called high-intensity social distancing campaign nears its end on Sunday, Prime Minister Chung Sye-kyun announced yesterday while presiding over a coronavirus meeting in central Seoul that the government is currently discussing a new guideline system to be implemented.

Chung, however, warned that members of the public cannot expect to return to their pre-crisis lives.

“It may take a significantly long time to go back,” Chung said. “Perhaps we may never be able to go back.”

As for Wednesday’s general elections, the government announced that hospitalized patients and quarantined people with symptoms will not be allowed to cast a vote, but that asymptomatic people under quarantine will be allowed.

Those who are quarantined and do not show any symptoms Wednesday will be allowed to leave their homes from 5:20 p.m. to arrive at their polling station by 6 p.m. On their way, they must wear a face mask and either walk or drive and not use public transport. Once they arrive at the polling station, they will wait in a separate location until other voters finish casting their ballots.

Once the other voters have completely left the station after 6 p.m., asymptomatic people under quarantine will place their votes, after which they must return back home by 7 p.m. The government warned that anyone who wanders off during this time will be severely punished. Quarantined people who wish to vote must respond to a text message sent by their local government office Monday or Tuesday, or in case they are told to self-quarantine after Tuesday noon, contact their local government office to inform their will to vote.