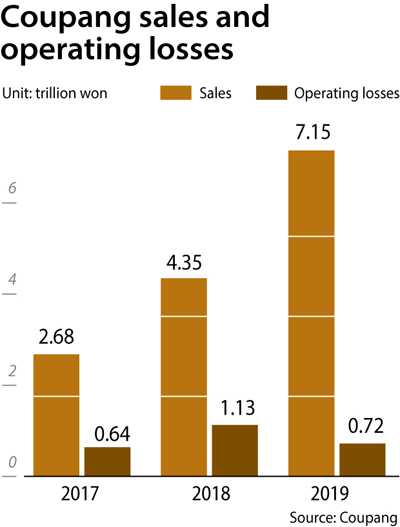 The company said “rocket delivery,” its same- and next-day service, contributed to the growth in sales, and added that household appliance and fresh produce sales also helped.

It declined to provide details.

The company also said that growth was driven by an increase in the number of registered users, but it didn’t make these numbers available.

“The speed of rocket delivery is thanks to the technologies and infrastructure that predicts consumer demand and places products at nearby rocket delivery facilities,” said Coupang CEO Kim Bom. “Coupang will continue to invest aggressively in developing technologies and building infrastructure to go beyond dawn delivery and offer unprecedented services so that people will one day ask themselves, ‘How could I have lived without Coupang?’”

As of last year, Coupang had 168 distribution facilities nationwide that deal with more than 6 million types of products, according to the company.

In February, it expanded the rocket delivery service to Jeju Island.

“The rapid increase of rocket delivery facilities last year is seen to have contributed to the sales increase and recovery of its fixed cost,” wrote analyst Yoo Seung-woo from SK Securities in a report Tuesday. “The spread of coronavirus this year, which has led people to stay home, is also projected to give Coupang a boost in performance this year.”

“Coupang will have to reach at least 10 trillion won in sales for it to be able to turn an operating profit because of its high fixed costs,” said Seo Yong-gu, a professor of business administration at Sookmyung Women’s University. “But whether Coupang will be able to endure the fierce competition from Lotte and Shinsegae, which are pushing online business aggressively, is another issue that could determine Coupang’s survival.”

Seo added Coupang has almost run out of funds, but will likely secure investment from SoftBank, despite its recent struggles, as long as Coupang’s operating loss continues to drop and its sales increase. Coupang secured $2 billion from Softbank Vision Fund in 2018 and $1 billion in 2015.