Don’t tell these companies the pandemic is ending

Don’t tell these companies the pandemic is ending 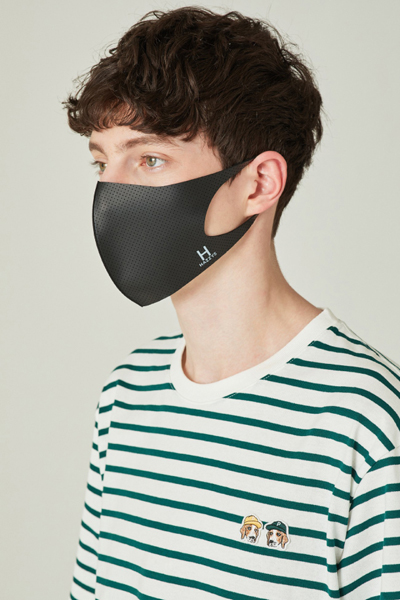 Despite the end in sight for the pandemic in Korea, some companies are jumping on the Covid-19 bandwagon, from conglomerates to underwear makers.

They are looking for the corona boom to continue, or to export to where the outbreak is not yet under control.

Some are hoping that outbreak-related products, such as masks, become more permanent accessories in our wardrobes and style will become as important as function.

The trend is especially evident in the apparel industry, which has been struggling as the business has been weak for some time.

LF’s Hazzys in late March released a mask with a replaceable filter.

Sold on its online mall, the mask not only blocks 94 percent of pollutants but also blocks ultraviolet light. It also looks good, according to the company, as it creates “a sharp V line” on the wearer’s face.

“LF designed a mask to reflect the situation where masks have become a daily necessity,” said Kim Hyeong-beom from the company’s communications department. “People have also grown to commonly wear a face mask due to fine dust.”

LF sold 80 percent of its inventory in the first week. In the second week, it expanded production to meet consumer demand, according to Kim.

“LF doesn’t have an immediate plan to export masks,” he said. But as the company is already active in China and exports other products to Taiwan and Thailand, there is a possibility.

“The coronavirus will ultimately come to an end, but even when it’s gone, we plan to promote face masks as accessories, like a wallet or a belt, because it plays a big role in how one looks.”

Ssangbangwool & Try Group, well-known for the underwear brands Try and Vivien, also jumped on the bandwagon.

It first started selling KF94 filter masks last year on a white-label basis, winning the approval of the Ministry of Food and Drug Safety.

The number that comes after KF refers to the percentage of particles a mask can block.

Ssangbangwool also branched out to China, where it manufactures and sells cotton masks. The company sold 3.5 million masks in Jilin Province.

“The underwear market continues to grow. But the rise in the number of competitors makes it difficult for the market players to increase the market share, making it difficult to expand business,” said Jeon Seul-ah from Ssangbangwool Group’s communications department.

Just because companies deal with cotton doesn’t necessarily mean it’s easier for them to manufacture or sell face masks, according to Jeon.

“Manufacturing underwear and face masks are two very different things with different assembly lines,” said Jeon. “Lacking the experience of selling them is another risk to start trading in face masks.”

Good People, which sells Bodyguard underwear, is working with Dai Kyoung Pharmaceutic to enter the hand sanitizer market abroad. Discussions started in February and are ongoing.

Dai Kyoung Pharmaceutic will be the manufacturer, and Good People will sell the products under its own brand name abroad.

It will be Good People’s first foreign foray.

“The company plans to sell hand sanitizers in the United States and Europe, where demand is high due to the coronavirus,” said Seo In-su from Good People.

“We decided to diversify business to secure new profit because of the company’s stagnated sales.”

“Korea’s apparel market has reached a mature stage,” said Lisa Hong, senior research analyst at market research firm Euromonitor. “That means the industry’s growth has lost momentum. For brands to continue growth, they have to solidify identity based on the trend.”

“Entering a new business could generate a synergy effect and help the brand expand, as was demonstrated by Chanel that gradually expanded to selling shoes and bags,” said Prof. Lim Chae-un, who teaches marketing at Sogang University.

“Wrong expansion decisions, like replacing its key product, could hurt the brand image. But considering that face masks and hand sanitizers are something in high demand, they could add positive change to the brand.”

Some smaller companies are dissatisfied about the expansion by others, especially when it comes to conglomerates.

Shinsegae International said at the shareholder meeting in March it plans to sell hand sanitizers via its home furnishings brand Jaju.

In a partnership, Amorepacific started selling hand sanitizers in April to meet the demand during the coronavirus outbreak.