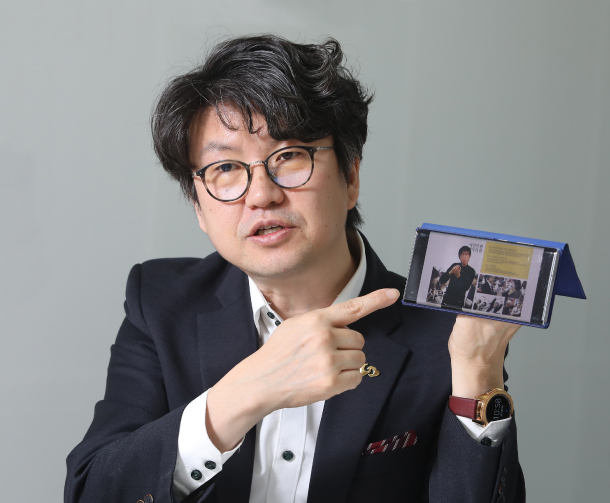 Kim Sang-hwa, director of the Korea Center for Accessible ICT, demonstrates a service that connects the deaf with signed campaign pledges on Friday at the office of the center in Geumcheon District, southern Seoul. [PARK SANG-MOON]

Being hearing impaired is especially hard during election season, regardless of how impassioned the speeches and loud the sound trucks.

Kim Sang-hwa, director at the Korea Center for Accessible ICT, has devoted 30 years to helping the deaf or hard of hearing use advanced technologies.

Kim developed a platform utilizing QR code recognition that allows the deaf to access videos explaining the pledges of candidates with sign language.

He also works with the government to come up with appropriate communication channels for the deaf to properly disseminate information on disasters and pandemics.

The Korea JoongAng Daily sat down with Kim to discuss the projects he engages in and future plans to narrow the communication gap. 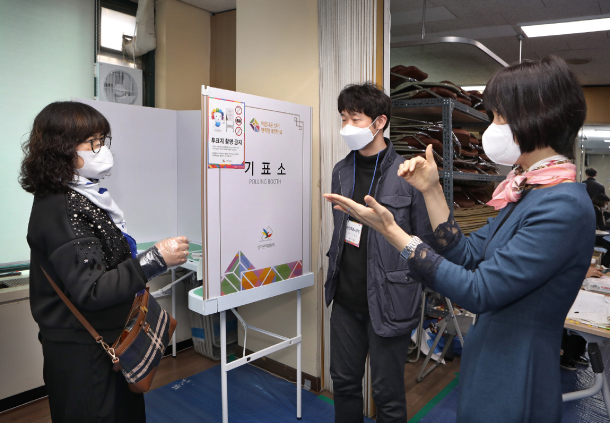 Kim Tae-soon, a deaf person who heads a sign language interpreter service center in Geumcheon District, southern Seoul, casts a ballot in early voting held in Gasan-dong with the help of an interpreter on Friday. [PARK SANG-MOON]

Q.What brought you to work for the deaf?

A. I first met deaf people in 1989 when I worked at a telecommunications company. I was on the subway, and two people were communicating in sign language. I was attracted by the way they engaged in conversation, which led me to follow them to where they went. They headed to a Ephphatha church, and we became friends. To communicate with them, I learned sign language.

My work was focused on communications between machines, but the encounter redirected my interests toward person-to-person communication. Drawing on my major in engineering, I came to learn that assistive technologies could help the deaf and hard of hearing convey meaning.

When did you start developing the platform designed to make campaign materials and pledges accessible with sign language?

I began working on it in 2010. Campaign materials guiding voters through the promises of the candidates as well as the locations and schedules for voting were written in text. Those who use sign language as their primary language and signers sometimes can’t comprehend the documents. People without knowledge of the deaf or the deaf community could downplay the burden, saying that since they can see, they will be able to read. But the assumption is a great misconception because signers are not always fluent in Korean, spoken and written. It is also worth noting that since auditory problems are not always explicitly expressed, the difficulties are often underestimated compared to people with vision loss or physical limitations. As for the campaign materials, the law encourages candidates to make them in braille by subsidizing the expenses. However, there is no such support for signers. I’ve also advocated the need to support the making of signed campaign materials to lawmakers.

How does the platform work?

It works by utilizing QR codes. When a user scans a code on the poster of an election candidate with their smartphones, their mobile page will be automatically linked to a video featuring an interpreter signing the candidate’s pledges and information.

Are there other areas that you focus on to resolve the obstacles facing the deaf?

I’ve also worked on translating books into sign language since 2003. It started with 20 books, but the list has grown to 5,000 since then, which are available at a welfare center for the deaf and hard of hearing. The works are not word-for-word translations but rather adaptations into sign language.

Another focus is ensuring safety for the deaf. I think it is a timely issue to discuss when all of us face the coronavirus. As a lot of communication related to the pandemic are pushed out to the general public via text messages, live television updates with limited captions and press conferences sometimes without an interpreter, deaf people find it hard to be up to date about all the details of the virus. So the Korea Center for Accessible ICT collaborates with the Ministry of the Interior and Safety on a project aimed at delivering preventive safety services to suit the receivers.

Now, the alert comes in the form of text messages with an alarm sound. The format excludes signers who can’t read Korean. A preferable way could be a video link with an alert light on mobile devices.

Where do you want to focus your business in the longer term?

To support communication between signers and non-signers, interpreters exist. But the interpreters, typically belonging to local community centers, are unable to cover all the needs and demands of the deaf. It takes almost a quarter of a day to accompany a deaf person to a hospital, given the commuting and waiting time. And there are only around three interpreters for each center. In light of the problem, I am working on a program capable of comprehending sign language and receiving queries from the deaf. It could be in the form of a moving robot, which already exists in China. But we are in the very early stage of collecting data on sign language. The next step is to develop an algorithm to decipher the signs and turn them into programmed language.

You also give consultations for tech companies such as Samsung and LG Electronics. What kind of functions were added as a result of your advice?

Samsung requested consultations to make their smartphone products friendlier for the deaf. For instance, they added a light option to help deaf people catch calls. LG Electronics typically takes advice for their home appliances. In designing user interfaces for connected devices, the home appliance maker tried to consider different types of users. Voice activation, for example, is near to impossible for many deaf and hard of hearing people, so I advised them to add other options such as displays to control the appliances.