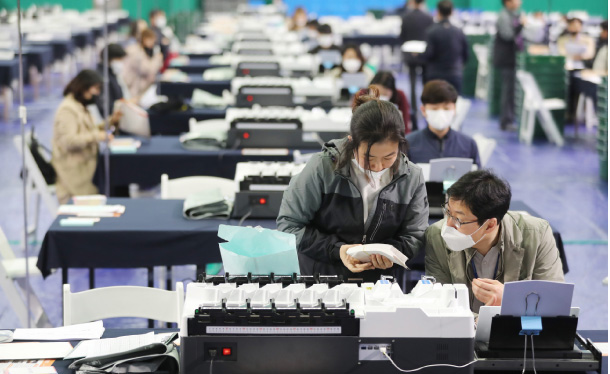 Officials from the National Election Commission examine electronic ballot-tallying devices at a gymnasium in Yeongdeungpo District, western Seoul, on Tuesday, on the eve of the general elections. [YONHAP]

The outcome of today’s general elections will be finalized Thursday morning as it will take time to count ballots, the National Election Commission (NEC) said Tuesday.

From 6 a.m. till 6 p.m. today, voters will cast ballots at 14,330 voting stations nationwide. Each voter will cast two ballots - one to elect a representative for a constituency and another for a political party, which will elect proportional lawmakers.

Because 35 political parties registered for the proportional lawmaker election, the ballot is 48.1 centimeters (18.9 inches) long, making it impossible to count in automated machines. The NEC said the proportional representation ballots will be counted by hand.

A higher total voter turnout means more ballots to count. This year, turnout for early voting was 26.7 percent of all registered voters, the highest ever, a possible indication of voting enthusiasm.

The NEC has 251 ballot-counting stations nationwide, and ballot boxes will arrive at counting stations around 6:30 p.m. today. Early voting boxes and mail voting boxes, currently being held at the NEC’s regional offices, will also be moved to counting stations. Around 8 p.m. Thursday, the first in a series of announcements on results for district lawmakers will be released.

Rough outcomes for the constituency seats are expected as early as midnight. The NEC will update information hourly on its internet site.

Proportional representation ballot counting and allocation of seats among the political parties will take longer. The NEC said the awarding of proportional seats to parties will take place immediately after ballots are counted. Based on a new system introduced late last year, the 47 seats will be awarded to parties through complicated equations.

The NEC said it will mobilize 157,000 workers to oversee the voting. Another 74,000 will be mobilized for ballot counting.

Voters in self-isolation due to the coronavirus will be allowed to cast ballots after 6 p.m. today as long as they do not exhibit symptoms. According to the government’s guidelines, those voters will be allowed to leave their homes starting at 5:20 p.m., after informing local government officials about their departures via an app on their phones or a text message.

They must wear face masks and are prohibited from using public transport. They will be required to wait in outdoor waiting zones, and the authorities will require them to keep two-meter (6.6-foot) distances from other people and from one another among themselves. They can’t chat.

They will use special polling spaces to mark their ballots.