Korean Foreign Minister Kang Kyung-wha on Monday credited the government’s robust testing program for stabilizing the coronavirus, adding Seoul was ready to ship hundreds of thousands of testing kits to the United States.

“We have acted quickly and pre-emptively, and that is not just our philosophy but a reflection of our recent experience,” Kang said in a televised interview with France 24, going on to refer to the preceding Park Geun-hye administration’s “inept response” to the Sewol ferry accident in 2014 and the Middle East respiratory syndrome outbreak in 2015. 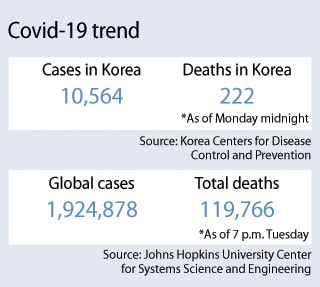 “So this government has been very determined to be prepared when disaster strikes,” she added. “We may not be able to prevent disasters from striking, but we can do a lot to prepare so that we can minimize the human suffering and contain the socioeconomic consequences.”

Covid-19 continues to elude control in various advanced economies in the West but is receding steadily in Korea. According to health officials, Korea recorded 27 new cases Monday, marking almost a week since daily infections dipped below 50. That put the total number of infections at 10,564.

There were, however, five more fatalities recorded, putting the total death toll from the virus at 222.

Of the new infections, two occurred in Seoul, eight in Gyeonggi and one in Incheon, while there were three in Daegu and five in North Gyeongsang, said the Korea Centers for Disease Control and Prevention (KCDC).

Seven people tested positive for the virus at a testing center at Incheon International Airport. Of the 27 new infections, 12 were linked to people coming from abroad, while 15 occurred locally, the KCDC said.

Around 52.3 percent of cases in the past two weeks can be traced to foreign travelers, said KCDC Deputy Director Kwon Jun-wook in an afternoon briefing Tuesday.

Kang noted in the interview that the greatest risk factor in Korea was now travelers. “This is a global challenge,” she said. “It is not enough that we contain the disease inside the country; this is a challenge that we have to overcome together as a global community.”

Yet the uncertainties that linger as to how the virus spreads remain a cause for concern, Kang added. “What we are discovering these days is that of those fully cured and released, many of them have been found to test positive a few days later,” she said.

A mandatory lockdown, however, was not an option being considered by Seoul as it would run contrary to its principle of openness, the minister said. “Our approach has been, from the very beginning by default, respecting the people’s right to free movement and then to implement measures where necessary and proportionate to the needs to manage the risk,” she said.

Kang also confirmed Korea was due to send some 600,000 testing kits to the United States on the request of U.S. President Donald Trump. According to the Ministry of Foreign Affairs, the kits - manufactured by three Korean companies - have been approved by the U.S. Food and Drug Administration and were to be shipped Tuesday.

When asked about North Korea’s claims that it had no coronavirus cases on its soil, Kang said Pyongyang’s assertions need to be taken with a “grain of salt” given the regime’s closed nature.

This has not stopped Seoul from proposing cooperation with the North in the health sector, but “so far we have not received a positive response,” she added.

It was not immediately clear what proposal Kang was referring to, but South Korea’s Ministry of Unification on Tuesday said her remarks were linked to President Moon Jae-in’s call for inter-Korean health collaboration in an address on March 1.