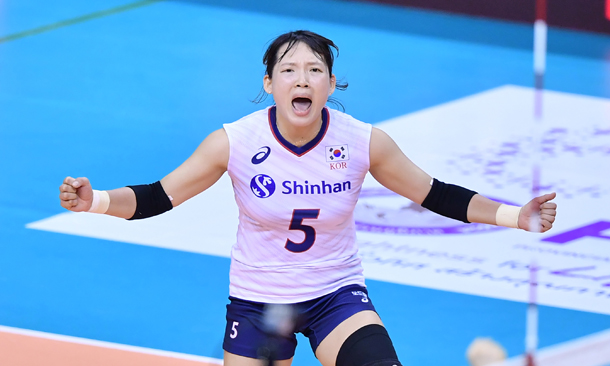 After more than 25 years of playing volleyball, Kim Hae-ran finally announced her retirement after the 2019-20 season ended earlier than expected.[FEDERATION INTERNATIONALE DE VOLLEYBALL]

Kim has not only been a crucial member of the Korean Volleyball Federation (KOVO), she’s also played a key role on the national women’s volleyball team as she was the starting libero for the 2020 Tokyo Olympics qualifier.

Back in January, she said she considered the 2016 Rio Olympics as her last chance but went on to postpone her retirement for four more years before finally deciding to call it quits.

“I had no expectations of participating in the Tokyo Olympics,” Kim said. “I didn’t even think that I would compete [for the national team] at the Olympic qualifier, but having gone through this far [in my career], I’m very thankful.” 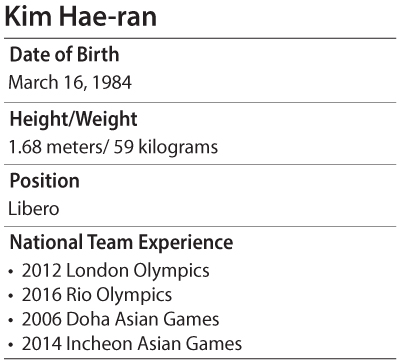 Throughout the 2019-20 season, she finished second in dig, with an average of 6.36 per match. The season ended earlier than expected due to the coronavirus outbreak, a catalyst for Kim to finally make up her mind to retire.

Serious thoughts of retirement have been on 36-year-old Kim’s mind since last year. After getting married in 2013, Kim postponed her honeymoon and only focused on volleyball.

But she now hopes to start a family and aims to make that goal her new focus.

In her very last season, the Pink Spiders finished third in the KOVO by picking up 14 wins and 13 losses, throughout 48 matches. She does feel disappointed that the season ended without her being able to play all the remaining games, but in terms of her retirement, she believes that it was the right decision.

Throughout her career, she’s received hundreds and thousands of spikes. Kim made her debut in 2002 with the Korea Expressway Corporation Hi-Pass in 2002, at a time when KOVO was not even established.

Since its establishment in the 2005-06 season, she’s topped the league in digs for nine straight seasons.

Combining the men’s and the women’s leagues, she’s picked up the most number of digs, at 10,437.

“I’ve played volleyball very inflexibly,” Kim said. “Having played the sport under huge pressure throughout all these years, I want to tell myself that ‘you worked hard.’”

Below are edited excerpts of the interview Kim had with Ilgan Sports.

Q. I guess bittersweet is the right word to describe your retirement. I’m sure you had a lot of thoughts going through your head before reaching the decision. How do you feel now?

A. I’ve always thought about this. Actually, when the 2018-19 season ended, I was going to retire, but I ended up playing another year.

At the time, it was hard for me to let go because I had some disappointments and still had some affection toward [volleyball and winning].

Also, since my husband also suggested that I play another year, I played one more season. As the season ended earlier due to the coronavirus outbreak, I actually thought about [my retirement] a lot.

Last January, when the Korean women’s volleyball team qualified for the Olympics, you played as the national team’s starting libero. In the league, you still are considered one of the best liberos so it probably wasn’t easy for you to retire. How did you come to your final decision?

I always wanted to leave when I was at my best. I thought last year was the right moment [for me to retire], but I played another season because I wanted to win. But I think it’s O.K. to let go of everything even if I feel a little bit of regret.

If the Tokyo Olympics was to be held in July this year, do you think you would have postponed your retirement again?

Well my goal was to consider this season as my last. But if I got selected for the national team, I wanted to go to the Olympics. If you’re an athlete, you want to compete at the Olympics.

What is the biggest reason behind choosing to retire?

Pregnancy. If it wasn’t for pregnancy, I thought about playing as long as I possibly could. But right now, the priority in my life is getting pregnant. To be honest, these days I want daughter, but I wouldn’t mind if it’s a boy. Even if it’s difficult, I want to have two children at once, so twins. Anyways, my plan is to have two children.

Your husband was a former athlete, and currently he’s a coach for a team in the WK League, the women’s K League. Did his help and encouragement throughout this time help?

He was a big help mentally. We always talked about retiring. Since it wasn’t easy for me to quit everything at once, we talked about letting go of one thing at a time.

You got married in 2013, but you still haven’t gone on honeymoon?

Yes, so we are trying to go this year, but I think it’ll be difficult because of the coronavirus. I guess there’s no such thing as honeymoon for me.

What was the most memorable match in your career?

Definitely the win last year. It was my very first win since I made my pro debut in 2005 so I was super thrilled about it.

In KOVO, considering both the men’s and women’s leagues, you only needed 572 defensive plays to become the first ever player to reach 15,000 in the league. Do you have any regrets about not achieving that number?

I’d be lying if I said I didn’t have any ambitions for the record. I didn’t really think about it up until now, but once I actually saw the remaining numbers for the record, it was a little disappointing.

When you first joined KOVO in 2005, you were an outside hitter. But shortly after, you switched your position to libero. When you look back at it, what did that position change mean to you?

I made the change due to major injury, which lead me to have two surgeries. I had ankle surgery after joining the pros, but I had to redo my surgery later. After all that, jumping got harder so I switched my position to libero at a young age. And this ended up being the turning point in my volleyball career. Thanks to that, I got to be on the national team and got to continue my career for a long time.

Also, after I got my knee surgery, I switched teams and joined the Heungkuk Life Insurance. With the Pink Spiders, I got to experience my very first win, and everything was good.

I do feel a little more comfortable about retiring, since I’m leaving after our team won.

Other players have returned after childbirth. Are you considering coming back to the court anytime in the future?