[NEWS IN FOCUS] Show me the money: Where is the Covid-19 cash?

[NEWS IN FOCUS] Show me the money: Where is the Covid-19 cash? 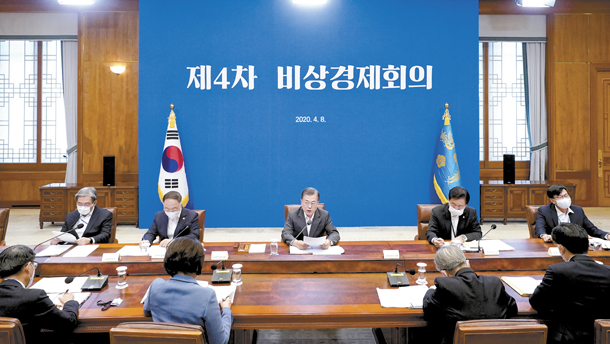 President Moon Jae-in, center, announces, during the third emergency economic council meeting held on March 30, the government’s plan to distribute emergency relief of up to 1 million won (＄821) to 14 million households, or 70 percent of all households in the country, to ease the financial challenges caused by the coronavirus pandemic while encouraging people to spend at small local shops and restaurants to keep the domestic economy alive. [YONHAP]

Am I going to get the money or not?

This is a question many Koreans are asking themselves these days in regard to the government’s emergency disaster grant, which it promised to distribute to 14 million households - to all but the wealthiest 30 percent - in May.

The grand plan has been generating controversy since day one, when the government officially announced it during the third emergency economic council meeting headed by President Moon Jae-in on March 30.

The problem then was the same as it is now: who is qualified exactly to get the money.

Countries globally are grappling with similar issues. In the United States, that $1,200 “check” has become the stuff of legend, with assurances that some people will get the money this week mixed with a caution that others could be waiting for months.

But in Korea the situation is especially frustrating as the powers that be have been arguing over definitions and costs for so long that events are fast overtaking them. The people who need the money may not see the cash until the crisis is well in the rearview mirror.

At the core of the debate is the method of choosing who should be getting the money. How do you define the 70 percent, and how do you properly identify them?

The method favored by the government is the use of national health insurance payment records. This immediately ran into criticism, as it’s not clear whether it captures all people who should be getting the funding.

Critics argue that the national health insurance payment data is outdated and therefore could exclude those truly in need.

The clock is ticking, and the rush is on.

With so many people out of work or forced to reduced hours, and with so many self-employed with restaurants and clothing stores virtually out of business, those affected and hoping for a quick cash boost have clamored to find out if they are eligible.

On April 3, the day that the insurance payment standard was announced, visits to health insurance branch offices were up 58.1 percent from the daily average the previous month.

Phone inquiries were up 24.6 percent.

As with many of these schemes, the seemingly deserving find they don’t quite fit the criteria. On paper at least, they are inconveniently well-off.

A 45-year-old man, who wishes to remain anonymous, said he recently logged in to see if he and his wife, who also works, would be eligible for the grants. But their combined insurance payment was above the maximum for a family of three.

“My salary and my wife’s earnings from her small clothing store is around average of what others make, and yet we’re disqualified?” said the 45-year-old. “My wife’s business has been struggling since last month when coronavirus cases surged.”

“According to the government our family is supposed to be in the top 30 percent, which we are definitely not.”

Another 40-something also wonders who exactly is in the 70 percent.

“My wife and I aren’t even close” to qualifying, he said. “It seems the government announced that 70 percent will be receiving the grant, but in reality not even 50 percent seem to be qualified.”

Some speculated that the grant program could be a campaign strategy for buying votes in the general elections.

Many complaints revolve around the methods.

The health insurance payments being used in determining the recipients, they claim, may not reflect the reality on the ground for a lot of people.

The number doesn’t seem to account for the dynamic situation in the job market, with people suddenly losing work or having their pay cut. Their hardship is not quickly reflected in the statistics.

The situation in the job market quickly changed this month as companies regardless of size are suffering under the impact of the outbreak. The health insurance records of smaller companies are often not as up-to-date as those from larger companies.

Businesses with more than 100 employees are required by law to report employee income to the National Health Insurance Service every month to determine contribution rates, of which the companies pay half.

Smaller companies are not required to file updates so frequently. As a result, the data being used by the government to determine eligibility could date back to 2018, failing to capture wage cuts or unpaid leave going back to that time.

The National Health Insurance Trade Union harshly criticized the government on its use of the health insurance payment to determine who will get the grant.

In a statement released April 7, the union argued that the government’s proposal to give the grant to 70 percent of households only contributes to the controversy and fails to properly reflect the accurate income situation.

“The current system is not an accurate reflection of the current situation,” the union statement said. “The health insurance contribution, which is calculated in April, is based on the previous year’s income. The one that comes out in April this year is based on 2019.

“[March’s payment] leaves out the significant decline in income that started since February this year.”

The union added that many people are likely to see their health insurance contributions rise even when their actual income has declined recently since the data is based on last year’s numbers.

The situation is even worse for regional subscribers, mostly the self-employed.

Unlike the employed, whose health insurance is calculated based on their wages, regional subscribers incorporate both their income and personal assets, such as real estate and vehicles.

As such, the payment is much higher than for those employed.

“Because of the [coronavirus] situation this year, [people] are on the edge of bankruptcy,” said Ahn Chul-soo, former presidential candidate and current head of the People’s Party. “It doesn’t make sense to use a data that is two years old in determining the grants.”

On April 6, President Moon said the government will work to prevent further confusion by establishing clear criteria for recipients.

Since then, nothing more has been mentioned on the subject.

The national health insurance payment data isn’t the only source of confusion.

In announcing its plan, the government said it would be excluding the wealthiest 30 percent from the program, but it did not specify how it would be defining the top 30 percent.

It said it will announce the details later, but so far, speculation is all the information that’s available. According to local news reports, the government is looking at excluding those who have paid the comprehensive real estate taxes, which is charged on high-end apartments or multiple-unit properties.

According to the Ministry of Land, Infrastructure and Transport, those who have paid the comprehensive tax on a single apartment whose assessed value exceeded 900 million won ($739,000) last year totaled 218,124 households, and 93 percent of them were in Seoul. In the rich neighborhood of Gangnam, southern Seoul, 69,441 households were billed.

A Blue House petition argues that those who own two or more apartments should be excluded from the grant program.

As the measure used to determine eligibility has become a point of contention, pressure is building to simply include everyone.

Political parties have chimed in, though the suspicion is that their enthusiasm is in part driven by the elections.

United Future Party leader Hwang Kyo-ahn, who previously said the government grant was a populist ploy, on April 5 proposed distributing 500,000 won to each and every citizen.

The following day, ruling Democratic Party leader Lee Hae-chan proposed giving the grant to every person in the country regardless of income or residence.

“The disaster measure is not a welfare policy but an emergency disaster measure,” Lee said. “We promise that once the general elections are over the party will closely review all related problems in coming up with measures where every single person could be confident that the country is protecting them.”

The emergency grant was first proposed by Lee Jae-woong, founder of Daum and now head of Socar.

In late February, he petitioned the Blue House, proposing 500,000 won be given to those in dire straits.

“Due to the fear of Covid-19 infection, the economic crisis is becoming serious - people’s jobs and income and their very survival is at stake,” Lee said in the posting. “Small businesses, freelancers, contract workers, students and the 10 million unemployed are in need of income so they can pay their rent, take care of children and [eat] ramen at home.”

“It would save lives,” Lee said.

In a Facebook post on March 31, Lee said that forcing local governments to cover 20 percent is unacceptable.

“The government is actually ordering local governments to pay 200,000 won while handing out 800,000 won,” Lee wrote on Facebook. “Gyeonggi will distribute its own basic disaster income that has already been decided on while distributing the [central] government’s portion without the additional budget from Gyeonggi.”

Ahead of the central government’s emergency grant announcement, Lee on March 24 announced the distribution of 100,000 won to every Gyeonggi resident except for newborns. That means a family of four would receive 400,000 won.

The Busan city government on March 24 announced its own plan to give 1 million won to 186,000 small businesses and self-employed people in the city who are affected by the coronavirus. It estimated that it would cost 185.6 billion won.

South Chungcheong decided to cancel its own emergency grant in exchange for covering the 20 percent proposed by the central government. The local government was planning to give 400,000 to 600,000 won to 238,000 households in its province.

Unlike Gyeonggi, which refused to pay for the overlap of emergency funds, Seoul Mayor Park Won-soon on April 2 during a press briefing said that the Seoul Metropolitan Government is all in.

“There have been questions about whether one could receive both Seoul’s and the [central] government’s aid,” Park said.

Seoulites “can receive both.”

Seoul earlier announced a plan to transfer between 300,000 won and 500,000 won to middle- and lower-income households.

“The cooperation between the central and local governments in financing the emergency aid fund is very important,” Hong said.

In a recent report, the Korea Institute of Local Finance estimated that if the government’s grant proposal goes through according to the initial plan, the local governments’ burden, including their 2 trillion won piece of the emergency grant, will be a minimum of 7.6 trillion won.