Cases of coronavirus coming back cause alarm

Cases of coronavirus coming back cause alarm

The stabilization of coronavirus infections continued as Koreans Wednesday headed to cast ballots in the parliamentary elections.

But a series of cases in which people apparently have become sick with Covid-19 a second time are raising concerns that containing the disease may be tougher than believed. 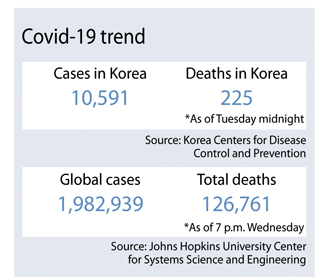 According to health authorities, 27 new infections were recorded across Korea on Tuesday, bringing the nation’s total number of cases to 10,591.

A total of 225 people have died from the coronavirus, three more than the previous day, while 7,616 have been proclaimed fully recovered, 82 more than the day before.

Five of the new infections occurred in Seoul and six in Gyeonggi. In Daegu, which was once the epicenter of the outbreak in Korea, there was one new infection, but nearby North Gyeongsang had six new cases.

Of the Gyeonggi infections, two were people who apparently contracted the disease a second time. According to the Seongnam city government, a 50-year-old female nursing assistant who worked at Bundang Jesaeng General Hospital tested positive Tuesday evening.

In early March, the hospital had a cluster of 42 infections, mostly health workers, including the nursing assistant. She initially tested positive on March 7 and received care at another hospital in Gyeonggi. She was discharged on March 28 and spent two weeks in self-quarantine.

But she tested positive again on Tuesday, the day before she was to be released.

A 21-year-old man who was part of a cluster of infections at the River of Grace Community Church in Seongnam also tested positive again Tuesday evening. He first tested positive on March 16, underwent treatment until March 28 but was found with the virus a second time while in quarantine.

On Monday, a woman in her 40s tested positive six days after being discharged from a hospital following her recovery from Covid-19. She too was an adherent of a church associated with a cluster of infections, the Saeng Myeong Saem Church in Suwon, Gyeonggi, where 11 people contracted the disease in March.

In Bucheon, Gyeonggi, a 52-year-old woman who worked at an insurance call center in Guro District, western Seoul, tested positive for the virus on multiple separate occasions. The woman was diagnosed with the virus on March 10 as part of a major cluster of cases at the call center but since underwent treatment and was declared fully recovered on March 29.

All patients declared recovered from the disease test negative at some point.

She, however, felt symptoms again on April 4 and tested positive. Though she stayed in self-isolation due to the lightness of her symptoms, she tested positive again on Sunday and had to be hospitalized this week.

According to the Korea Centers for Disease Control and Prevention (KCDC), there have been a total of 19 cases in the wider Seoul area where people have tested positive again for the virus after initial recoveries. In Sejong, there have been five such cases, one involving an official of the Ministry of Oceans and Fisheries who tested positive Monday a month after he was initially diagnosed on March 12 and then recovered.

Nationwide, 133 people have been reinfected after initial recoveries, the KCDC said. They are not tallied twice in Korea’s overall case count. A large portion of the reinfections involved people in their 20s, a total of 30 people.

It is not yet known whether these cases are the result of the virus reactivating itself after remaining dormant in an individual’s body, or whether the patients contracted the virus entirely anew.

The growing discovery of such repeat cases can be attributed to increased testing of those already recovered prompted by a few reinfection cases that emerged in Daegu and North Gyeongsang last month.

But the surprising frequency of reinfections - one for almost 80 initial infections - have put authorities on alert, while local governments have scrambled to conduct contact tracing for discharged patients.

Under current Covid-19 response procedures, virus patients who are discharged after testing negative must undergo a subsequent 14-day self-quarantine, which is believed to be the incubation period for the virus.

If they feel symptoms again at this time, they are recommended to contact a medical center, but no rules are in place to enforce such behavior.

With a growing number of reinfections, health officials are planning to strengthen guidelines on monitoring people even after they are released from quarantine.