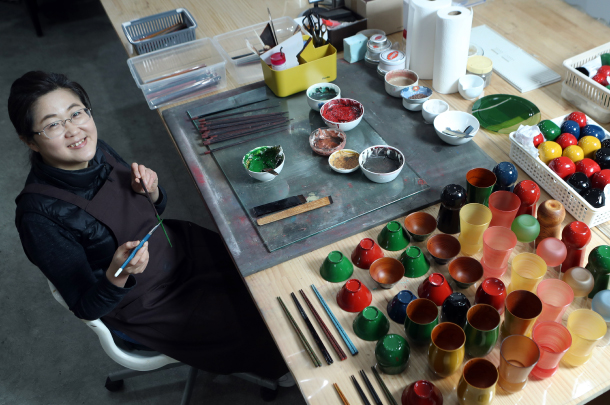 With the coronavirus pandemic showing no signs of fading around the world, people are caring more and more about maintaining personal hygiene. Hand sanitizer and other personal hygiene products are flying off the shelves, and some people are even looking to the past for answers.

Wooden housewares coated with sap cultivated from lacquer trees have been long admired for their beautiful shimmer and sturdiness.

The traditional technique is called ottchil, or lacquer varnish, and it is known to make containers resistant to insects, water and humidity.

Due to many benefits the traditional technique possesses, wooden containers finished with ottchil have long been considered high-quality products.

But with the advent of many alternatives for wood from plastic to stainless steel and glass, wood containers are not as common as they used to be, and the traditional technique is no longer in high demand. Some people are, however, making crafts using the lacquer technique and adding modern touches of their own.

Jeong Eun-jin is one of those people. The 46-year-old ottchil artist opened a studio of her own called JL Contemporary in the hope of making products that could be used in everyday life.

She makes cups and utensils in various shapes and size. Her products come in bold, bright colors and zany designs to appeal to younger consumers today.

“This cup with the wide bulging bottom was originally made by my own father but I made up [for some of the weak points in the cup] and continue using the design. My father reinterpreted the design from prehistoric times,” said Jeong.

Jeong grew up watching her father Chung Hae-jo making crafts using ottchil. Chung is famous both at home and abroad for blending the traditional technique with contemporary art.

Chung’s technique is starkly different from other ottchil techniques.

When the desired shape comes into existence, Korea’s five traditional colors - red, black, blue, yellow and white - are dabbed on the shape.

Left: Jeong paints ottchil onto chopsticks. Right: More than 20 rounds of ottchil are applied to a pair of chopsticks. [KIM SEONG-RYONG]

Chung was included as one of the 30 finalists for the 2018 Loewe Craft Prize.

The award was launched in 2017 by Loewe, a luxury bag manufacturer, to honor craftsmen across the world.

For Jeong, ottchil was a natural part of her daily life. She majored in ottchil crafts in college, but she didn’t carry on with traditional crafts after that.

“For me, ottchil was my parents’ job. I didn’t think of it as something I wanted to do. So I was away from it for 15 years. I was doing something totally different [for a living]. But I started graduate school for ottchil in 2007 and realized that this is what I have to do for the rest of my life.”

A decade ago, Jeong began making chopsticks and cups using ottchil techniques while working on her own art pieces.

“They are sturdy. In addition to that, I love the shape of their growth rings. The price is also reasonable. Personally, I prefer zelkova trees [over ash trees] but it’s hard to purchase them as they are mostly used for other things and their prices are not suitable for making everyday necessities.”

A factory that Jeong has been working with for a long time is in charge of carving the wood according to Jeong’s design and drying it.

The most important procedure when producing ottchil crafts is drying.

“When ottchil is painted on wood that is not totally dried up, it’s so hard to paint the lacquer. Even if you manage to dab the lacquer on the wood, the shape of a product is likely to get distorted later.”

The sturdiness of ottchil wooden products lies in its complicated drying procedure.

Jeong uses birch wood when making chopsticks and the procedure is no different from making wooden cups because the wood is very hard.

She tries to paint as many thin layers of ottchil as possible on each pair of chopsticks.

Jeong makes wooden cups with wood from ash trees and paints ottchil, or lacquer varnish, onto them after mixing it with various pigments. [SOLUNA LIVING, KIM SEONG-RYONG]

“After one dab of lacquer, you have to dry it and then grind the surface. Otherwise, you can’t paint another layer of ottchil,” said Jeong.

Ottchil is all about repeating the same process over and over again. It is impossible to produce a single product in a short span of time.

“My father repeats painting the lacquer between 80 and 100 times to get a 1 centimeter-thick ottchil,” she said.

Apart from being time-consuming, the lacquer itself is pricey. It comes from drops of sap from lacquer trees.

There are two types of ottchil available. The first is a filtered one and it is called raw chil. Chil means to paint in Korean. The second is refined chil, and it is produced by artisans at the request of customers.

For example, 3.75 kilograms (8.3 pounds) of 100-percent ottchil that comes from lacquer trees grown in Wonju, Gangwon, is priced at around 3 million won ($2,500). The high-quality lacquer is mostly taken by veteran artists first and it is difficult for young artists like Jeong to get their hands on it.

Because of the complicated manufacturing process, ottchil products are quite pricey.

A spoon and chopsticks set created by Jeong costs 100,000 won. Some may think the price is too expensive for a set of wooden cutlery, but once they learn how the utensils are made, they begin to see that the price is pretty reasonable.

“I can make a set [of a spoon and chopsticks] that costs between 20,000 won and 30,000 won, but I can’t paint more lacquer for them [with that price]. [With less ottchil,] the products can’t last very long. You have to throw them away after one or two years of use.

“Instead of doing that, it’s better to buy chopsticks that you can use for 10 years.”

Making cups and spoon sets is not something Jeong puts a priority on, though.

“A lot of people know ottchil as just a finishing technique that adds shimmer to wood and ceramics, but it is more than that, in fact.”

Jeong is interested in applying the natural lacquer to other materials like glass. She also keeps rediscovering the old technique by trying out new things.

Another experiment she is trying out these days is dabbing ottchil on glass.

“I want to delve into this sensual pleasure of matching ottchil with wood and glasses,” Jeong said.