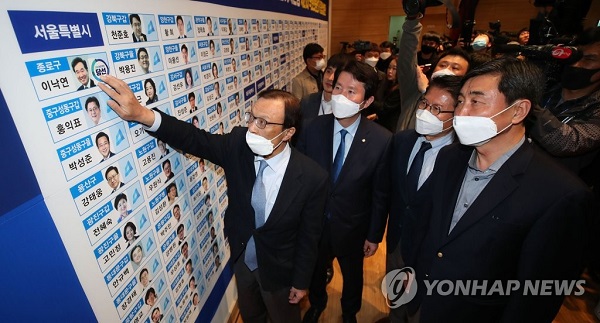 Chairman Lee Hae-chan of the Democratic Party marks winners on Wednesday night at the partyĄŻs situation room in the National Assembly building. [YONHAP]

Voters elected 253 lawmakers for constituencies and 47 proportional representatives by voting for political parties. As of 9:15 a.m. on Thursday, 99.9 percent of the ballots for the 253 districts were counted and the DP won 163 seats.

As of 9:15 a.m., 99.41 percent of the ballots were counted for proportional representation election. While the two major parties did not field proportional lawmaker candidates, their two satellite parties won a majority of the votes.

According to the current projection, the DP-CP alliance is expected to control 179 seats – enough to pass most bills except for a constitutional amendment, which requires two-thirds of the assembly’s vote.

Since Korea introduced its current political system in 1987, it is the first time that any single political group will control nearly three-fifths of the legislature.

The UFP-FKP alliance is expected to win 101 seats, just enough to block a constitutional amendment.

The defeat effectively put an end to the political career of Hwang, a former prime minister in the Park Geun-hye administration, and any hope he had of running for president.

Turnout for Wednesday’s election was 66.2 percent, the highest in 28 years.