New infections of the coronavirus dipped to 22 Wednesday in Korea, the lowest day-to-day figure since cases began to soar in mid-February after a church in Daegu became a major hot spot.

But local health officials said they were watching out for a new cluster in Yecheon County, North Gyeongsang, saying about 30 people have been infected in the small town over the past week. 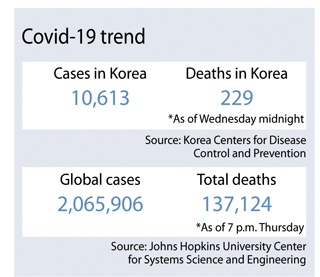 The Korea Centers for Disease Control and Prevention (KCDC) announced Thursday morning that 22 people were diagnosed with the coronavirus Wednesday, bringing the country’s total case load to 10,613.

By Wednesday midnight, 229 people had died, up by four from the previous day, while 7,757 people had been declared fully recovered, up by 22 from the day before.

Of the 22 new patients, 11 were imported cases. Among Korea’s 10,613 total, 967 patients, or about 9.1 percent, contracted the disease from overseas, mostly from Europe or the United States.

Wednesday’s figure was the fourth day in a row that Korea had fewer than 30 new infections.

In Yecheon County, about 165 kilometers (103 miles) southeast of Seoul, at least 36 people have been diagnosed with the coronavirus so far, 30 of whom received their positive test results over the past week.

The source of the infections has been traced to a 48-year-old woman in the town who tested positive on April 9.

The Yecheon County Office announced Monday that the central government’s so-called high-intensity social distancing campaign, which is set to wrap up this Sunday nationwide after four weeks, will be extended in Yecheon for one more week to last till April 25.

During that period, people will be strongly recommended to stay home and keep a distance from each other when they leave their houses, while companies will be recommended to run staggered work schedules or allow employees to telecommute.

Kim pointed to a fresh wave of coronavirus infections in Singapore, which was praised for containing the outbreak, saying local health authorities were closely monitoring Singapore’s situation to prevent Korea from following in the same footsteps.

Korean health officials have been keen to reduce transmissions within local communities by placing tens of thousands of people under self-quarantine for 14 days, the incubation period of the coronavirus, mostly for having been in close contact with someone who tested positive for the disease or for returning from foreign countries heavily stricken by the pandemic.

A local court on Tuesday issued a pretrial detention warrant for a 68-year-old Korean man in Songpa District, southern Seoul, who disobeyed the government’s isolation orders by leaving his residence and visiting a sauna twice on the same day, a day after returning from the United States.