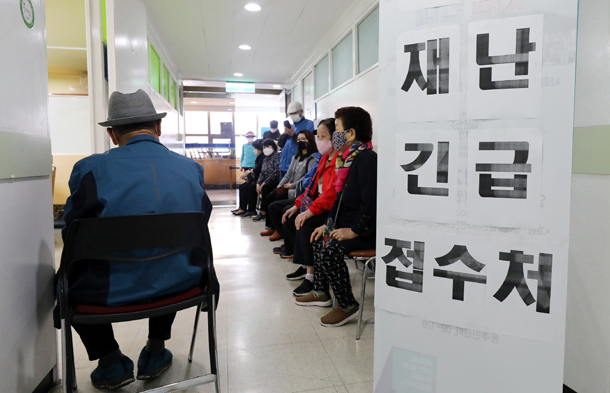 Citizens wait to sign up for emergency relief handouts at a community center in Seoul as the city government began offline registration for the relief on Thursday. [NEWS1]

Middle- and lower-income households in Seoul who think they’re eligible for receiving coronavirus emergency handouts from the city government can now sign up for the relief at their local community service centers, the Seoul Metropolitan Government announced Thursday.

Foreigners who live in Seoul and are legally documented can also sign up if they have a Korean spouse or are raising children who are Korean nationals.

Offline registration began Thursday and will run through May 15, the city said in a statement.

Online registration already started on March 30, as city officials feared people may contract or spread the coronavirus if applications were received offline.

Both online and offline methods will be available through May 15 until 6 p.m.

As with the online method, Seoul said the offline method will run on a five-day rotation system, through which applicants can register on designated days of the week from Monday through Friday based on their year of birth.

As of Thursday, the city said over 600,000 people in the capital applied online for the handouts. Seoul officials separately visited or contacted roughly 7,000 people to add them onto the roster of recipients due to their difficulties with mobility, the city explained.

Seoul was one of the first local government offices in Korea to announce financial relief packages to its constituents after the country’s number of coronavirus infections began to soar in mid-February.

In mid-March, the Seoul Metropolitan Government relayed plans to offer emergency handouts to Seoul citizens who make less than the median income in case they aren’t eligible for a number of other categories of subsidies from the government.