Eastar Jet to remain grounded for at least six weeks

Eastar Jet to remain grounded for at least six weeks 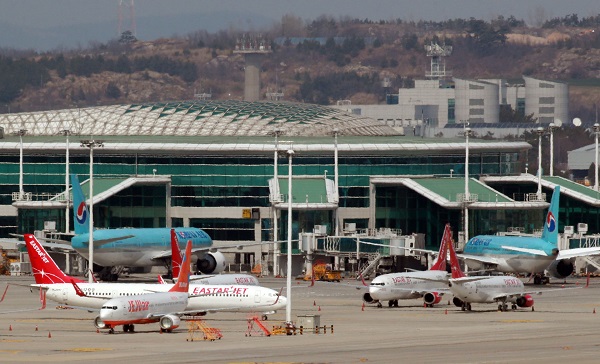 Eastar Jet aircrafts at Incheon International Airport early April. The budget airline announced it will suspend operation of domestic flights until May and international flights by June. [YONHAP]

Eastar Jet will remain grounded through the end of May as all of the country’s airlines struggle with a lack of passengers and a lack of destinations that will still accept foreign visitors.

The airline, which at one time was flying to over 30 Asia-Pacific cities including Vladivostok in Russia, Kota Kinabalu in Malaysia and Macau, simply has nowhere it can fly overseas and has no idea when it will be possible to serve those cities.

Eastar is in the process of being acquired by Jeju Air.

T’way Air, Air Busan and Air Seoul are in the same boat.

While they are slowly resuming domestic flights, they are still unable to reopen international services because of global travel restrictions. Full-service carriers — Korean Air Lines and Asiana Airlines — are maintaining a 10 percent flight operation rate on international routes.

Although airlines are slowly resuming domestic flights on increased demand as the weather warms and the number of Covid-19 infections decline, business remains sluggish.

Traffic is only strong on Jeju routes, as other destinations in Korea can easily be reached by train, car and bus.

“Except for Jeju, all domestic routes are a loss for airlines because there aren’t enough passengers due to alternatives like the KTX,” said Park Jin-woo from Air Busan’s communications department. “Making things worse, airlines are currently offering all sorts of promotions to draw passengers.”

The number of international passengers in the first week of April was 48,100, down 97.6 percent compared to the same period a year before, according to the Korea Civil Aviation Association. Domestic airline passengers dipped 97.5 percent on year in the same week to 28,500.

The airlines are struggling to stay afloat by implementing layoffs and salary cuts for their employees, but it is not clear how long they can survive given the lack of sales and their high fixed costs.