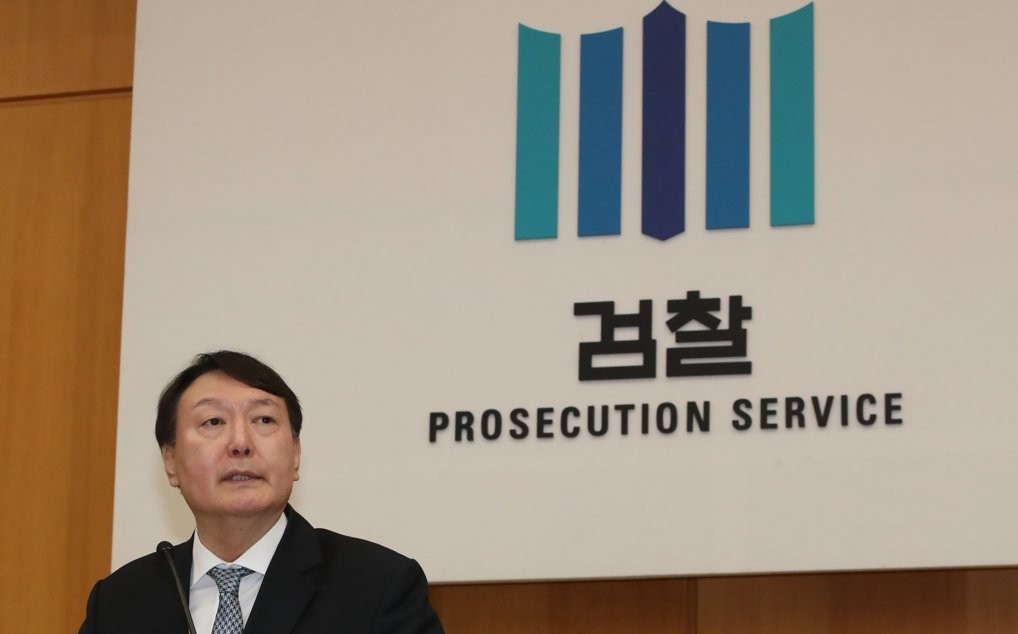 Prosecutor General Yoon Seok-youl speaks at a meeting with senior prosecutors on Feb. 10 to discuss a plan to crack down on election law violations ahead of the April 15 general election. [YONHAP]

Buoyed by the landslide victory in this week’s general elections, the ruling party and its allies are increasingly pressuring Prosecutor General Yoon Seok-youl to resign, inviting criticism from the opposition.

“I lost the election, but I want to say what I want to say,” Rep. Kim Yong-tae of the United Future Party (UFP) said Friday in a posting on Facebook. “Woo Hee-jong’s arrogance and imprudence are unbearable. As if he was waiting for this moment, he said he wants to behead Prosecutor General Yoon now. Although I suffered a defeat, I am offering a warning.”

Kim was referring to a Facebook message posted Thursday by Woo, a co-chair of the Citizen Party (CP), a satellite party of the ruling Democratic Party (DP). Criticizing Yoon for resisting the Moon Jae-in administration’s campaign to reform the prosecution and conducting investigations into former Justice Minister Cho Kuk and his family for academic fraud and corruption, Woo overtly pressured Yoon to step down.

“The people who held candlelight protests outside the prosecution [to support Cho] are now asking from [the legislature] if you are going to stay,” Woo wrote. “What will you do now?”

Kim, who served three terms in Yangcheon B District of Seoul, ran as the UFP’s candidate in Guro B District against Moon’s confidant Yun Kun-young and suffered a bitter defeat.

Other members of the DP and its ally also attacked the prosecutor general. Kim Yong-min, a lawmaker-elect of the DP, said in a radio interview on Friday that Yoon was abusing his power to stop an investigation into an allegation that a reporter and a senior prosecutor had formed an inappropriate relationship.

Other liberal politicians elected Wednesday such as Kim Nam-kook have also demanded Yoon’s resignation. Choe Kang-wook, former Blue House secretary indicted for having allegedly provided a fake internship certificate to Cho’s son to help his law school applications, was elected as a proportional representative for the Open Minjoo Party on Wednesday. During the campaign period, Choe has argued that Yoon must be the first suspect to be probed by the new investigation agency for senior public servants.

The DP leadership refrained from making a direct attack on the chief prosecutor. DP Chairman Lee Hae-chan urged the CP to take into account the position of the DP and its lawmakers-elect because the two parties are a coalition.

The prosecution also resumed investigations into politically-sensitive cases which key members of the Moon administration are suspected to be involved in. The prosecutors are investigating illegal stock trading of biotechnology firm SillaJen and an accusation that Lime Asset Management, the country’s biggest hedge fund, covered up losses.

The prosecution will also resume the suspected election rigging of the Ulsan mayoral race. Former presidential chief of staff Im Jong-seok and other Moon aides were questioned in January, but the prosecution suspended the probe until after the general elections in order to avoid any political controversy.