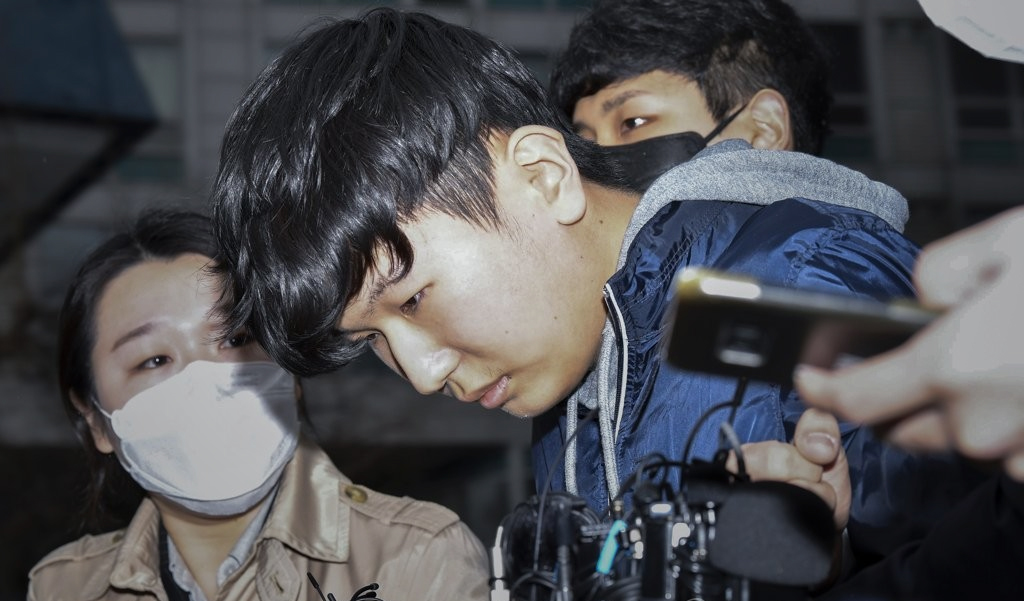 Kang, who turned 18 in May, became the first underage person in Korea to be paraded in front of the media on the basis of criminal allegations, as per a police expert panel decision Thursday. The legal age in Korea is 19.

He filed for a court order Thursday afternoon asking that the decision be revoked, but the request was turned down by a local court.

The press gained the first glimpse of the suspect as police brought him out of the Jongno Police Precinct Friday morning in order to transfer him to prosecutors for investigation.

Kang, better known by his internet alias “Butta,” is accused of helping prime suspect Cho Ju-bin, 24, operate a series of chat rooms on the Telegram instant messaging app to share sexual photographs and videos obtained by blackmailed victims. When asked by reporters about the allegations he faces, Kang had few words.

“I’m sorry. I want to sincerely apologize, and I’m sorry,” he said. He did not answer any other questions.

Kang’s subdued behavior in front of the media stood in stark contrast to the visibly brazen conduct shown by Cho during his perp walk on March 25.

At the time, Cho, emotionless and donning a neck brace, made no apology to his victims but rather thanked the public for “stopping [his] unstoppable life as a demon.”

Cho is the suspected mastermind behind the Telegram chat rooms’ operations, heading what prosecutors called a type of cartel in league with a handful of co-conspirators like Kang. The gang exploited what could be over a hundred victims into providing sexually explicit and degrading photographs and videos of themselves, which were then sold to paying members on Telegram.

So far 25 victims — including eight minors — have been identified. Some of the victims were not even in their teens.

Kang, who has been in pretrial detention since April 9, is accused of having primary responsibility for managing the profits from the chat rooms, mostly collected in the form of cryptocurrencies.

He was a high school student throughout the time the chat rooms were active since last May and has since enrolled at a university in Seoul.

Prosecutors said one of their human rights commissioners spoke to Kang Friday morning through a video conversation, presumably in relation to his denied request for anonymity filed on the basis of his status as a legal minor.

He was also due to be grilled for the first time by prosecutors on a special digital sex crime task force on Friday afternoon with his lawyer present.

Prosecutors said they were also due to decide whether to update the press before Kang’s imminent indictment on the details they have learned of the specific role he played. The state prosecution service last week announced it had modified guidelines for investigations of digital sex crimes in light of the immense public outcry over the Telegram chat room case.

Of three co-conspirators named by Cho after his arrest in March, Kang and another suspect surnamed Lee are in custody. An active-duty soldier, Lee was arrested earlier this month by military police and is being investigated by Army prosecutors. The remaining suspect, known only by the alias “Samagui,” has yet to be captured, and police say they have faced difficulty in tracking the suspect down.

Police also said Thursday they have identified the online usernames of 15,000 members of the chat rooms who are believed to have paid to access the pornographic content. A thorough digital forensics probe was underway, said one investigator, but it would take a while before each individual is identified.