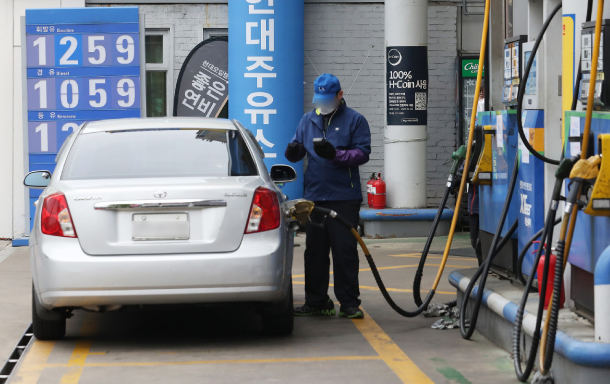 A gas station in Seoul on Sunday advertises 1,259 won for per liter of gasoline. According to the Korea National Oil Corporation on Sunday, the nation’s average gasoline price has fallen for 12 consecutive weeks due to the Covid-19 outbreak. [YONHAP]

As a glut in global oil supplies collides with plummeting demand at the pumps amid the coronavirus outbreak, gas stations are increasingly struggling to make ends meet.

The market has been declining steadily since 2016, with 448 gas stations closing over the past four years, according to the Korea National Oil Corporation’s official oil price management system website, Opinet. In the past three months, 32 gas stations have shut their doors.

The trend has even affected the country’s leading oil refiner, SK Energy. The company recently closed four of its branded gas stations and suspended business for an additional seven for an indefinite period.

Refineries have had to weather losses as the coronavirus pumped the brakes on the so-called driving season in spring, when an increase in road trips drives rising demand for oil.

Consumption of petroleum-based products dropped significantly for refineries in the first two months of this year. According to the Korea Petroleum Association, 152.782 million barrels of oil were consumed in January and February, a 4 percent drop compared with the same period last year.

While the association is still compiling statistics for March, officials at the Korea Petroleum Association say they have no doubt that consumption for last month will again be significantly lower than the previous year.

An estimated 11,545 stations are still in operation around the country, according to Opinet. 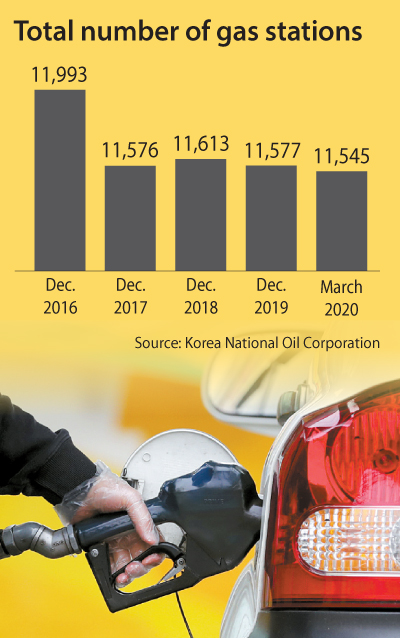 Industry officials speculate that more gas stations have been forced out than the official statistics reflect, as business owners are obliged to pay heavy costs to permanently close those operations.

Gas station owners must pay to tear down the facility, with an environmental fee that can range between 100 million to 300 million won ($82,000-$247,000). Many business owners choose to temporarily suspend their oil stations rather than completely closing them.

And some have trouble finding a new owner for their oil stations.

“The overall market prospects for gas stations are grim,” an industry official said. “No one is willing to buy a gas station, even for a lower price than the market average.”

Such a decline in demand for gasoline, coupled with the coronavirus outbreak, has got gas stations rethinking how they can attract customers and keep their businesses afloat.

Companies like Home Pick use the shuttered gas stations as logistics hubs to organize parcels between, allowing the owners to at least receive some rent. More than 400 gas stations nationwide have partnered with Home Pick.

Similarly, Hyundai Oil Bank has partnered with Coupang to use leftover space in the distribution network for the e-commerce company’s same or next-day delivery service.

But the business model can be a win-win deal only when there is a steady stream of parcels coming in.

Industry analysts are uncertain whether those creative efforts will be enough to make up for the operating losses this year, expected to amount to trillions of won.

“The drop in crude oil prices had a significant impact on the local market. We do not see any way out of this recession,” said an industry official.