U.S. President Donald Trump said Saturday he recently received a “nice note” from North Korean leader Kim Jong-un and ascertained that their relationship remains “good” in their latest round of letter diplomacy. 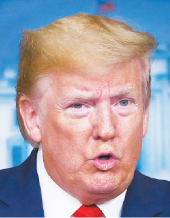 In a briefing by the White House coronavirus task force Saturday afternoon in Washington, Trump said, “I received a nice note from him [Kim] recently. It was a nice note. I think we’re doing fine.” But he did not elaborate on any details of the letter.

Denuclearization negotiations between North Korea and the United States have been deadlocked since last year, with working-level talks in Stockholm in early October ending without progress. The two sides have struggled to close in on sanctions relief for North Korea and the scope of its denuclearization since a second leaders’ summit between Kim and Trump in Hanoi, Vietnam, on Feb. 28, 2019 collapsed.

During the press conference, Trump recalled his third impromptu meeting with Kim at the inter-Korean border on June 30, 2019, where he briefly stepped into the northern side of the demilitarized zone (DMZ), becoming the first U.S. president to do so.

“We met at the line, I stepped over the line the first time anything like that, so it’s all good,” said Trump.

Kim Jong-un late last month received a personal letter from Trump offering cooperation with North Korea to fight the coronavirus pandemic, revealed Kim Yo-jong, the leader’s powerful younger sister and closest aide. North Korean official media reported on March 22 that Kim Yo-jong said that the personal letter from Trump was a “good example showing the special and firm personal relations” with her older brother and that the U.S. president expressed a desire to improve relations between the two countries.

However, she stressed that it was too early “to make a hasty conclusion” about whether that was enough to bring about a change in the “relations of confrontation” between the two countries.

Trump later confirmed he had sent a letter to Kim and said, “We are open for helping other countries” during “a very serious time.” Thus, there was interest in what sort of response Kim may have, as Trump extended an olive branch during the global pandemic.

Last Tuesday, North Korea fired what appeared to be a barrage of short-range cruise missiles off its east coast and air-to-ground missiles from fighter jets into the East Sea on the eve of the April 15 general elections in the South.

Trump downplayed North Korea’s missile provocations and said Saturday, “The haters, they say Trump’s given up so much,” but added, “I’ve actually increased the sanctions,” referring to his maximum pressure campaign on Pyongyang.

He defended Beijing’s role in tightening sanctions on Pyongyang and said, “China has been very good on the border. In fact, right now the border is stone cold closed between China and North Korea.”

South Korean President Moon Jae-in and Trump in a phone call late Saturday night agreed to continue to cooperate on the coronavirus pandemic and reaffirmed a push for humanitarian assistance for North Korea, according to the Blue House.

The 30-minute phone conversation came upon the request of the U.S. president and marks the 24th call between the two leaders.

Trump was said to have referred to Moon as “my friend,” said Kang in a briefing Sunday, and that the main purpose of the call was to congratulate Korea over the elections.

Trump called South Korea’s handling of the coronavirus pandemic the “best model” in a situation where many countries across the world are facing difficulties over Covid-19, according to the Blue House in a statement late Saturday. Moon, in turn, noted the low number of Covid-19 cases in Korea recently and said the government was considering whether to ease social distancing measures.

Korea was the first country to hold national elections amid the global pandemic, with a high turnout rate of 66.2 percent. The ruling Democratic Party won a solid majority in the 300-member National Assembly.

Moon said that he also looks forward “to an improvement in the Covid-19 situation in the United States in the near future through the strong leadership of President Trump” and said he hoped “a situation where we can focus on rebuilding the economy can come quickly.”

Moon also praised Trump’s active efforts toward peace on the Korean Peninsula, and Trump was said to have replied he will continue them.

Trump revealed during the Saturday phone call to Moon that he had received a “warm” letter from North Korean leader Kim ahead of telling the media, bringing up the topic first, according to a Blue House senior official Sunday.

However, there was no discussion whatsoever about the defense cost-sharing deal being negotiated by Seoul and Washington, added the official. The two countries’ previous Special Measures Agreement (SMA) expired at the end of last year, and they are struggling to agree on a new accord.

Trump also said that ventilators were being distributed in the United States, said the official, and asked whether Korea needed them. Moon thanked Trump and said that Korea will make a request if it needed them.

Moon and Trump last held a phone conversation on March 24, also at the request of the United States. At that time, Trump asked Moon for Korea’s support through coronavirus test kits amid a surge of cases in the United States.

Trump during the Saturday call thanked South Korea for a delivery of 600,000 coronavirus test kits last week. The White House in a statement said that Trump congratulated Moon for his party’s “strong victory” during the April 15 general elections and “expressed his appreciation for South Korea’s assistance to the United States in procuring” coronavirus test kits and “for its support to the American people.”

It added, “Both leaders agreed to continue working together to defeat the pandemic and restore global economic growth” and also discussed “further ways to strengthen the United States-Republic of Korea security relationship.”