Kim Hyo-joo has her sights set on victory

Kim Hyo-joo has her sights set on victory 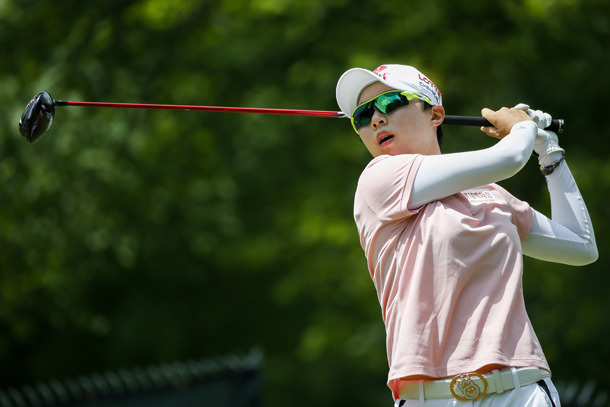 Kim Hyo-joo watches her shot during the second round of the Thornberry Creek LPGA Classic on July 15, 2019. [AP/YONHAP]

With an unexpected halt in the LPGA Tour’s 2020 season due to the coronavirus, Kim Hyo-joo has ended up taking the longest break from competing throughout her entire career.

“Since I became an amateur, this is the first time that I’ve rested for this long. I prepared a lot by training, but there are no tournaments,” she said.

Prior to this season, Kim has trained harder than ever before, but it’s already been five months since she last competed. Due to the coronavirus pandemic, the LPGA Tour had to halt its season. After the ISPS Handa Women’s Australian Open ended on Feb. 16, with Park In-bee’s victory, the LPGA Tour skipped its Asian Swing, where it was supposed to start with the Honda LPGA Thailand.

There were hopes that only the four tournaments in Asia would be affected, but as the coronavirus spread worldwide, all LPGA Tour tournaments were canceled until at least May 3.

Kim, who started her offseason training in Thailand and stayed in the United States until last month, has returned to Korea to wait for the season to begin.

Ranking 13th in the Rolex Women’s World Golf Ranking, there’s a special reason behind Kim’s hard work ahead of the season: to earn a spot on Team Korea at the 2020 Tokyo Olympics.

Since Korean golfers had been dominant on the LPGA, competition to represent the country at the Olympics is fierce.

At the Olympics, a total 60 golfers from across the globe will qualify for each of the men’s and women’s tournaments, two golfers from each qualifying country, although an exception is made for extremely high-ranking players.

The top 15 golfers in the world ranking automatically qualify, with a limit of four golfers per country within this category. It is probably not an exaggeration to say that it’s harder to earn a spot on Team Korea for women’s golf than to medal. As of the latest update, Kim is the sixth-highest ranked Korean golfer in the world ranking.

“This was probably the very first time, since I started golf, that I’ve worked this hard at weight training” Kim said. “Some people told me that I looked like I’m ready to compete immediately. It is disappointing that the Tokyo Olympics have been postponed, but I consider it a good thing that I’ve got more time to prepare.”

The postponement of the Olympics, also due to the coronavirus, has given her and other golfers more time to raise their world rank, but with more and tournaments being postponed or canceled, even that is becoming close to impossible.

For Kim, she heavily focused on weight training this offseason.

“Except Sundays, I worked out for two hours everyday, six times a week,” Kim said.

Looking at Kim’s performance throughout the 2019 season, she topped the LPGA Tour in average putting, at 27.59, as well as putts per greens in regulations, at 1.72. Her strength was her short game. However, her weakness was her average driving distance, at 244.79, which is ranked 154th on the Tour.

To improve her game, Kim decided that she needed to improve on her average driving distance, hence why she focused so much on weight training.

But Kim will have to continue to bide her time before she can put her hard work to the test.

Kim has continued her exercise regimen and says that during this stressful time it offers her some relief, since she’s unable to go outside and enjoy life as usual.

Aside from golf, she enjoys playing basketball, table tennis and tennis, among others. Recently, she played table tennis with fellow golfers Lee Jung-min and Kim Sei-young. Also, at an indoor training site, Kim plays foot volleyball and bowls at an alley nearby where she trains.
“Whatever exercise it is, I want to be good at it,” Kim said. “So I try to do everything, without being picky.”

Having made her LPGA Tour debut in 2015, this year marks her sixth on the tour. She earned her status card by winning the Evian Championship in 2014 as a non-LPGA member. The victory made quite the headlines as it was her first major appearance on the Tour and she also set the record for the lowest 18-hole score at a major by shooting 61 in the first round. Until 2014, just like many other Korean golfers, Kim played on the KLPGA Tour. After she made her debut on the LPGA, Kim immediately picked up a win at the JTBC Founders Cup in March, and a year after it, she picked up another at the Pure Silk-Bahamas LPGA Classic.

However, since then, Kim hasn’t won a tournament. She’s had three runner-up finishes in the 2019 season alone. The 2019 Evian Championship was probably the most disappointing finish for not only Kim but also for her many fans. It seemed like she was en route to finally pick up a win, but by making a triple bogey on the 14th hole in the final round, Kim allowed Ko Jin-young to seal a come-from-behind victory. On that hole, Kim took an unplayable from the bunker.

“Even if I went back to that situation, I would have made the same decision,” Kim said. “Because that was the best option.”

The disappointment only strengthened her drive to pick up a win this season.

In addition to picking up a win, Kim has also set herself some goals for her shot distance this season, which only adds to her eagerness to get back on the course.

“I want to see the increase in my shots at the tournaments,” Kim said. “So I want tournaments to start like right now.”