Gov’t, ruling party still at odds over who will get grants

Gov’t, ruling party still at odds over who will get grants 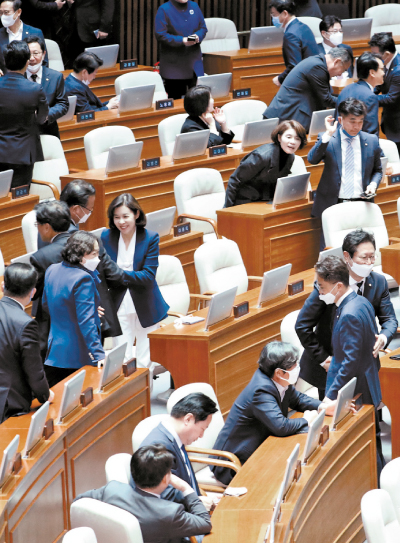 Lawmakers from the ruling Democratic Party exchange pleasantries at a plenary session of the National Assembly in Yeouido, western Seoul, on Monday. [YONHAP]

The government and ruling Democratic Party remain at odds over coronavirus pandemic relief grants - and whether they should go to everyone.

In a speech at the National Assembly Monday, Prime Minister Chung Sye-kyun stuck to the initial government proposal of a 7.6 trillion won ($6.2 billion) second supplementary budget to fund grants for 14.8 million households, the 70 percent of households with the lowest incomes, to help them weather the coronavirus outbreak.

“People’s lives are now pushed to the edge of a cliff,” Chung told lawmakers.

“As the damage from Covid-19 affects the overall economy, we have reached a limit with the current welfare system targeting [only] the vulnerable class.” Chung said the grants will exclude the 30 percent of households with the highest incomes, emphasizing fairness and a limit to financial resources.

“We expect the emergency aid would guarantee the livelihoods of people who are struggling from the Covid-19 crisis and stimulate spending.”

The party’s floor leader Lee In-young, however, said the party should keep its campaign pledge to give grants to each and every household.

He added that the ruling party will continue to try to persuade the government to expand the grants to every household and ask for cooperation from the opposition.

Foreigners would not be eligible except for permanent residents and foreigners married to Koreans.

“We have to pass the supplementary budget within April so that the aid could be delivered to everyone in early May,” Lee said.

On Sunday, ruling party leaders met with Blue House officials and the finance minister to discuss the issue.

Under the current proposal, grants to 14.8 million households would cost the government a total of 9.7 trillion won. The central government will be funding 7.6 trillion won through a second supplementary budget while local governments will cover the remaining 2.1 trillion won.

If all households got grants, the supplementary budget would have to be almost doubled to 13 trillion won.

The Democratic Party is claiming the increased amount could be funded through government bonds.

The government has been against that idea because it would increase the government’s total debt.

The second supplementary budget is supposed to be funded by cutting budgets for existing projects and other cost-cutting measures.

The Democratic Party argues that an additional 3 to 4 trillion won will not have a huge impact on the country’s fiscal soundness.