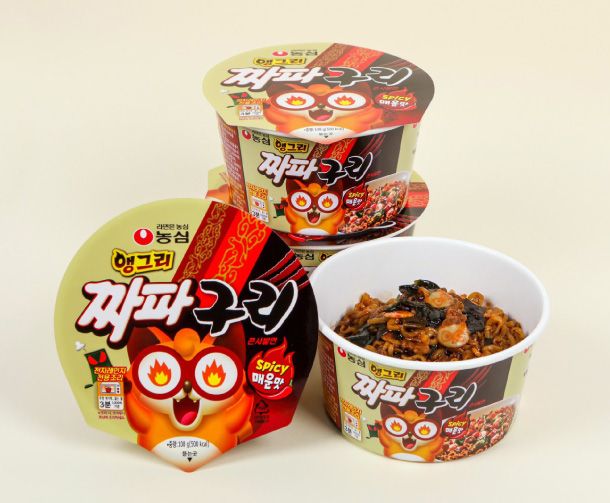 Nongshim announced Monday it will internationally release an instant cup noodle version of Chapaguri, a dish featured in the Oscar-winning film “Parasite,” in the international market in response to the global requests.

Chapaguri, a mixture of Nongshim’s two instant noodles, has been in high demand since the film won several Oscars at this year’s Academy Awards in February, including “Best Picture.” The cup noodles will be released in Korea before gradually launching in other countries, starting with the United States, Japan, Australia, Russia and countries in Southeast Asia

In a key scene in the movie, the mother of the rich family asks her maid to make chapaguri, a dish that combines Chapagetti black bean noodles and Neoguri spicy udon noodles.

Chapaguri will hit the shelves in May at the earliest.

The product will be sold in two flavors, from the spicy Angry Chapaguri to the original Chapaguri.

“Since mixing up Chapaghetti and Neoguri is part of the fun, we decided to make Chapaguri in cup noodles instead of plastic bag noodles,” said Nongshim in a statement. “It can be enjoyed at convenience stores or outdoors.”

Nongshim said it received requests to officially release Chapaguri noodles for foreigners to be able to get a taste of the mixed noodles outside of Korea.

“Hopefully, Chapaguri will play a key role in [the popularity of] Korean food by demonstrating the charms of Korean noodles,” said Nongshim.