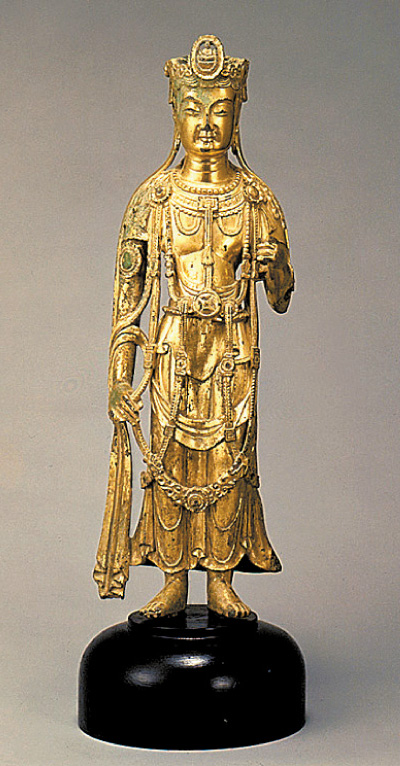 The area is believed to be a temple site, judging from various roofing tiles and earthenware of the Three Kingdoms Period. The Standing Gilt-bronze Bodhisattva, facing the front, is crowned by the ushnisha. The middle of the ushnisha is carved with an image of the Buddha in a round bolder. A somewhat long and square face puts on a solemn look, while the broad shoulders give it a gravy and stiff impression.

The Buddha is wearing a bead necklace, which comes down from the shoulders to the belly, forming an X shape. Wearing various accessories including an elaborate design by using different beads in the connecting joints, it’s worth noting among other Bodhisattva statues of Silla.

The right hand is holding a bead ornament, while the left hand seemed to have been holding a Buddhist ritual sprinkler and lotus branches, both of which are missing. A mandorla and pedestal are also missing, while a mandorla handle is well-maintained. Below the feet hangs a pillar-shaped point for setting up the pedestal.

As a whole, it is assumed that it was made in the early 7th century, judging from its grave and dignified look as well as splendid and elaborate ornaments, which are some of the main characteristics of the Buddha statues made in ancient China.