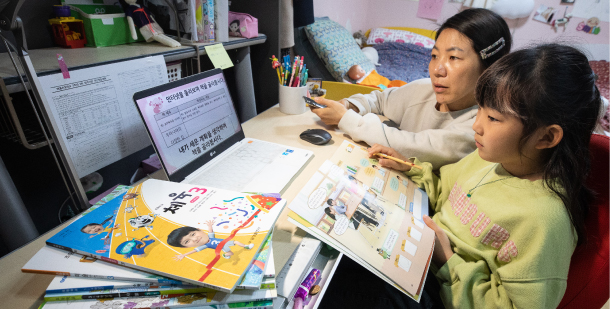 A third grader in an elementary school in Seoul learns through remote classes, kicking off her new school year Monday with her mom by her side. Over 1.3 million elementary kids in grades one to three, the last batch of students, started their semester Monday. [NEWS1]

The youngest three elementary grades kicked off their new school year through TV classes Monday, bringing all 5.4 million students nationwide to a remote learning platform amid the coronavirus pandemic.

One second grader at an elementary school in Seongdong District, eastern Seoul, sat in front of her living room television waiting for her lessons on the Korea Educational Broadcasting System (EBS) channel to start at 9:30 a.m.

Within 10 minutes of the TV class, she began twisting around in her chair, restless.

The teacher in the program said, “There are already students who aren’t sitting properly?” and the lesson proceeded into a sing-along.

“It’s only fun if I can sing with my classmates,” said the young student. “It’s no fun doing it alone. I want to go to school.”

Children in elementary grades one to three, or some 1.3 million students, finally kicked off their spring semester Monday after multiple delays because of coronavirus concerns. Their school year was supposed to have started in early March.

On April 9, the new school year commenced nationwide unprecedentedly through online classes for the first group of third-year middle schoolers and high school seniors. A second batch, including the older elementary grades and the rest of the middle and high school students, kicked off classes last Thursday. Kindergartens and child care centers remain closed.

Remote learning is generally comprised of interactive classes through video conference between the teacher and students; prerecorded online lectures; and assignments for students to complete.

However, Korean education authorities determined that there may be difficulties for younger students learning through computers, tablets and smartphones, so instead decided to air TV classes on the state-run EBS channel.

Two or three classes will be aired by subject per day on the EBS channel for the lower three grades, and individual elementary schools will supplement the classes by providing assignments.

Parents are generally relieved that the classes are being aired on public TV, rather than having to struggle with logging in on computers or smart devices with their fidgety young kids.

Jeong, a 39-year-old mother of a first grader, said after the first TV class, “There were lots of images and video footage, and the teacher ran the class in a fun manner.”

However, there are limits to younger students learning on their own, so parents supervising their kids are bemoaning that this is a “new school year for parents.”

Another parent surnamed Kim said, “I have two kids, so I am hectically logging one child onto online lessons and keeping the other seated for TV classes. I need to constantly watch over their shoulders to keep them in their chairs.”

Jeong said, “Parents will have to play the role of classmate and teacher. It feels like I am starting the school year.”

E-learning websites run by EBS and Korea Education and Research Information Service (Keris) to supplement individual schools’ lessons for older students have been riddled by technical glitches and unstable networks over the past two weeks. Education authorities have been working on smoothing out such technical difficulties and expanding servers and ascertaining network stability.

The EBS site ran smoother than before, without the log-in difficulties of the past weeks, though some students still had issues with videos buffering slowly.