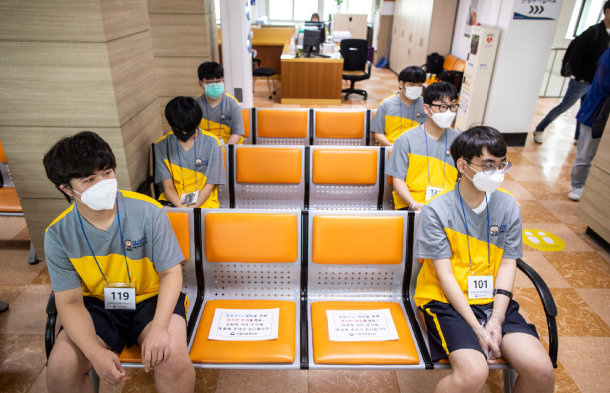 The Military Manpower Administration resumed physical checkups for potential draftees Monday after a monthslong suspension over the coronavirus outbreak. [NEWS1]

The government resumed physical checkups for potential draftees Monday after a monthslong suspension over the coronavirus outbreak, the military manpower agency said.

The examinations were halted on Feb. 24 for two weeks as the country witnessed a drastic surge in Covid-19 cases. The suspension was extended as part of the military authorities’ all-out efforts to stop the virus from spreading in military barracks.

“Starting today, we resume conscription examinations for those who wish to undergo that,” the Military Manpower Administration (MMA) said in a release.

The resumption is to prevent the possible impact of the virus situation on the country’s enlistment system and to minimize inconvenience for potential enlistees, it added.

The decision also came as Korea has seen a marked drop in the number of new infections.

On Sunday, eight new cases were reported, the first time the daily total has fallen to a single digit number in 61 days. On Monday, the country reported 13 new cases, bringing the total to 10,674.

“We will strictly adhere to social distancing guidance in conducting the examinations,” the MMA said.

All able-bodied Korean men must carry out compulsory service for about two years in a country that faces North Korea across a heavily fortified border.

Enlisted soldiers have been barred from vacationing, staying outside their bases and meeting visitors since mid-February, but the military is also mulling easing the restrictions.

The government earlier said it will ease some rules in the social distancing campaign against the coronavirus, while urging people to keep major distancing practices in place until early May.

According to the Defense Ministry, the number of infections in barracks stood at 39.

The ministry said Sunday that an Air Force trainee has tested positive for the virus, but clarified the next day that it will not include the case in its coronavirus statistics as he contracted the virus before joining the military.

The conscript entered the service early this month after fully recovering from the virus, but tested positive again after a two-week precautionary isolation in the barracks.

Around 1,200 service personnel were in quarantine at their bases as a preventive measure as of early Monday.