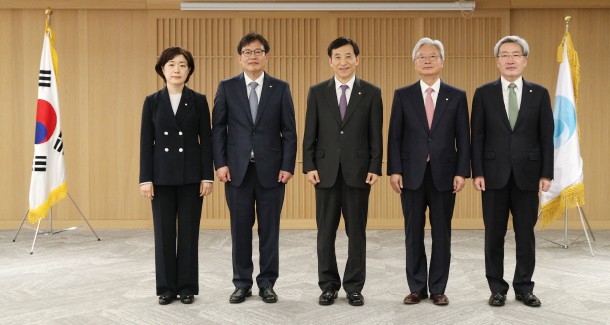 The central bank’s new monetary policy board members will likely be aggressive in their support of the economy and seem willing to consider all possible methods to counter weaknesses caused by the Covid-19 outbreak, according to comments made by the three at an inauguration ceremony held at the Bank of Korea Tuesday.

Cho Yoon-je, Suh Young-kyung and Joo Sang-yong were appointed to the board seats Tuesday and Koh Seung-beom started his second term the same day.

“Covid-19 brought about big changes to the role of the central bank, and I believe it could be a turning point in the bank’s history,” said Suh in her acceptance speech Tuesday. “Korea has already stepped into the zero-percent base rate range, which was unimaginable in the past. Along with Korea’s version of liquidity easing measures and direct loans to brokerages, the central bank should consider additional policies toward private sectors.”

Cho, who was recommended for the board position by the Ministry of Finance, acknowledged the severity of the economic crisis and said he would “support Korea’s stable and sustainable economy through monetary policies.”

Joo said the latest crisis would test the bank’s role.

“The global economy is facing the worst recession since the Great Depression,” he said. “Not only the government, but also for the central bank, it would be an opportunity to test how [each institution] handles the crisis. I feel pressured joining the board at a time like this, but I will try my best to stabilize finance and recover the vitality in economy.”

Koh, the first board member ever to be reappointed for a second term, concurred with the new members and acknowledged the growing central bank role in the face of extreme uncertainties in economy.

“I believe that in such a crisis, policies that actively counter the emergency should come first,” he said. “The stakes are higher than ever.”

The new members will replace Shin In-seok, Cho Dong-chul and Lee Il-hyung and join Koh as well as Gov. Lee Ju-yeol, Deputy Gov. Yoon Myun-shik and Lim Ji-won on the seven-member board.

The departing Shin and Cho were considered doves pursuing money easing, while Lee was considered a hawk, who rooted for tightening.

Regardless of the stance that will ultimately be taken by the new board members, the changing of the guard is coming as the central bank faces unprecedented headwinds and has demonstrated a willingness to pull out all the stops to defend growth.

“Cho and Joo have a deep understanding of the Moon Jae-in administration’s economic policies, so for a while the monetary board is expected to roll out easing measures that coordinate well and support the government-lead economic measures,” said Woo Hye-young, an analyst at eBest Investment & Securities.

The new board members are being encouraged to be creative.

“It is necessary for the bank to think of new policy methods rather than just traditional ways, especially since the global economy environment will change drastically once the virus subsides,” said former board member Shin. “I hope the bank puts thought into how it will adapt to the changing environment in the future.”

“We should think about if the bank’s reputation as an inflation fighter has now become a legacy that has to be overcome,” Cho said.