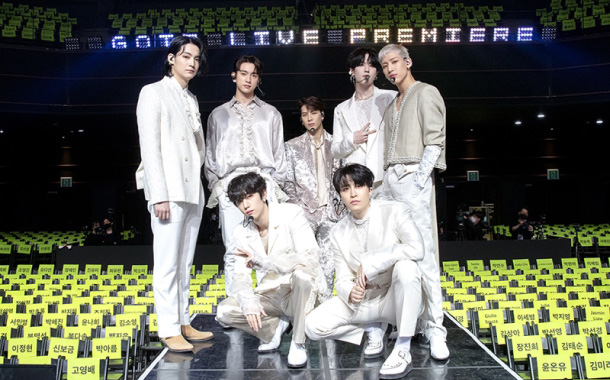 Boy band GOT7 kicked off promotions for its new EP “Dye” on Monday evening with an online showcase that was viewed by 1.77 million people, according to the agency JYP Entertainment.

GOT7 held its online showcase at 8 p.m. and streamed it through Naver V Live, kicking off the event with a performance of “Aura,” a track from the EP.

It was followed by the group’s first performance of “Not By The Moon,” as well as “Love You Better” and “Poison.”

After the performance, the members went into the empty audience and walked around the seats, which were labeled with the names of fans. The members of the group read their names out loud and answered their questions.

“We are preparing a lot of different things for fans,” the members said. “We are planning for an online meet-and-greet, in the form of a video phone call. We’ve never tried it before, so we think it’s going to be special for us too.”

Following the showcase, “Dye” topped iTunes albums charts in 40 regions around the world, and “Not By the Moon” reached No. 1 on the iTunes songs charts in six regions as of Tuesday morning.