‘Road to Kingdom’ promises to be fierce from the very beginning

‘Road to Kingdom’ promises to be fierce from the very beginning 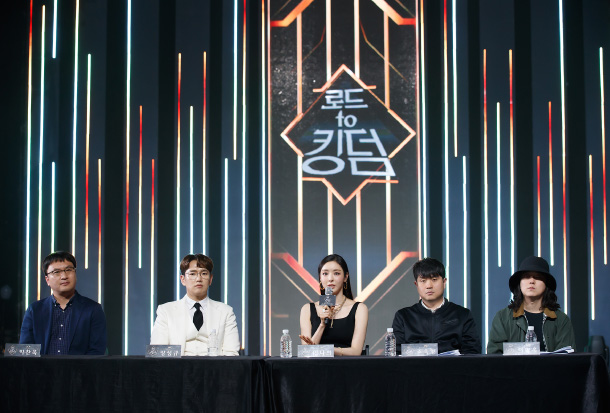 The producers and hosts of Mnet’s “Road to Kingdom” speak at a press conference on Tuesday. [MNET]

The next big K-pop sensation may come out of the Mnet music competition program “Road to Kingdom,” producers of the show told the press on Tuesday.

“We have recruited bands who have the potential to become the next top acts in Korea,” said producer Park Chan-uk. “The members of the groups that will be on the show are great at producing, some of them write and compose their own music and come up with their own dance moves - and you know that boy groups in Korea are known for their state-of-the-art choreography.”

“Road to Kingdom” will be an eight-episode program premiering at 8 p.m. on April 30. It is a follow-up to “Queendom,” a music competition program that featured singer Park Bom and girl groups, including AOA and (G)I-DLE.

Unlike “Queendom,” which starred artists who were already well-known at the time, “Road to Kingdom” recruited relatively newer groups.

TOO debuted this year, and VERIVERY and Oneus debuted at the same time on Jan. 9, 2019.

“The competition got fiercer down the road in ‘Queendom,’” said Cho Wook-hyung, chief producer of the program. “But on ‘Road to Kingdom,’ the competition is already so fierce from the very first battle because these are newer groups to the K-pop scene and they’ve also seen how things played out on ‘Queendom’ and they came with the right expectations.”

Members of the groups briefly appeared during the press conference to share their hopes for the show.

“We are a new group and are that much more excited to show the audience what we’ve got,” said Jaeyun of TOO. “We look forward to working with the producers and staff of the program and also getting to know the other teams.”

The two entertainers who hosted “Queendom,” Jang Sung-kyu and Lee Da-hee, are returning to host “Road to Kingdom.”

“It’s been an amazing journey already getting to know the artists on a more personal level,” Lee said. “They never fail to surprise us with each performance they have prepared. They will meet and exceed your expectations every time.”