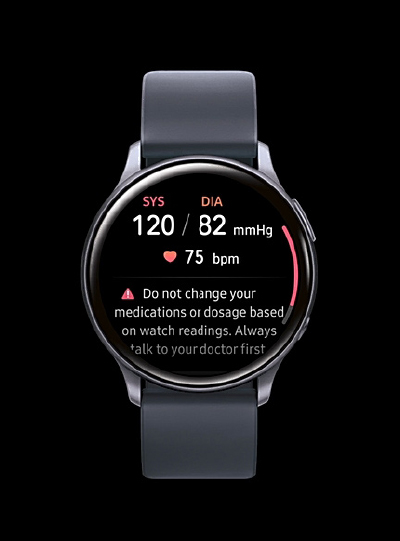 The Ministry of Food and Drug Safety announced Tuesday that it approved Samsung’s Health Monitor app, saying that the blood pressure monitoring feature of the app is reliable and comparable to conventional blood pressure cuffs.

The Galaxy Watch Active2 and later models will be upgraded with the sensor devoted to tracking blood pressure as early as the third quarter, according to the tech giant.

To engage the feature, a user needs to take an initial measurement from an external blood pressure cuff.

The device then analyzes pulse waves and compares them to the calibrated value to determine blood pressure changes.

Users are required to recalibrate their device with a blood pressure cuff at least every four weeks, however, to keep the measurement accurate.

Samsung says it hopes the new feature will help those suffering from high blood pressure.

“The Samsung Health Monitor app has the potential to help millions of people around the world who are affected by high blood pressure,” said Yang Tae-jong, corporate senior vice president and head of the health team at Samsung Electronics. “This is one of many examples of how Samsung is integrating its best-in-class hardware with the latest software innovations to develop mobile experiences.”

The green light could help boost the appeal of the Galaxy Watch series.

Wearable devices marketed by Samsung’s competitors, including the Apple Watch, are not equipped with the blood pressure tracking function, although they boast other health-related features such as heart rate and steps measurements.

The ministry said that the app is the world’s first such “software as a medical device” product approved by a regulatory agency to measure blood pressure.