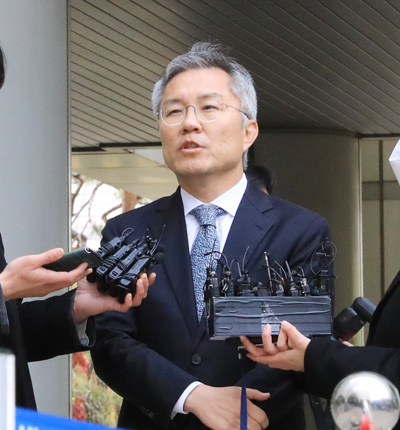 Choe Kang-wook, a former presidential aide, speaks to reporters at Seoul Central District Court on Tuesday where he faced his first hearing. [NEWS1]

“I was illegally indicted by political prosecutors at the order of Prosecutor General Yoon Seok-youl,” Choe, former presidential secretary for civil service discipline and a lawmaker-elect of the Open Minjoo Party, said on his way to a courtroom. He attended the initial session of his trial at the Seoul Central District Court in the morning, becoming the first member of the new National Assembly to stand a criminal trial.

“I believe the people have already reached a judgment,” Choe said. “It is extremely unfortunate that the prosecution is repeating its past practices of abusing its power, colluding with media to torture other people and producing innocent suspects en masse.”

Choe added that the political prosecutors must be tried, not him. “I hope the prosecution will stop dirty media strategies and stop telling a lie again to cover up its own lies,” he said.

The Seoul Central District Prosecutors’ Office indicted Choe in January on a charge of issuing false internship certificates to Cho’s son in 2017. At the time, Choe worked for a law firm in southern Seoul. Choe joined the Blue House in September 2018, when Cho was the senior presidential secretary for civil affairs.

According to the prosecution, Choe approved two certificates testifying that Cho’s son had worked as an intern for his law firm in 2017 and 2018. But the prosecution concluded that he never worked there.

Cho, who served as the senior civil affairs secretary at the Blue House from May 2017 till July 2019, became justice minister in September 2019 but stepped down after a mere 35 days amid an investigation into financial and academic scandals involving him and his family. Choe and Cho both studied law at Seoul National University during the same period.

The prosecution sent senior prosecutor, Goh Hyeong-gon, to argue its case. He argued that Choe and Cho were close friends since their university years. Because Choe worked as a lawyer for Cho’s wife, Chung Kyung-sim, in 2016 when she had a lawsuit concerning family inheritance, Choe also became close to her, Goh said.

Goh argued that Choe issued the fake certificates in October 2017 at the request of Chung. “I hope your son will gain admission,” Goh quoted Choe as telling Chung in a text message after he issued the certificates.

Because Cho’s son used the fake certificates to apply for graduate schools at Yonsei and Korea Universities, the prosecution had separately indicted Cho and Chung on charges of obstructing admission operation of the schools.

During its investigation, the prosecution also discovered that Cho had used the fake certificate issued by Choe and fabricated another one for his son’s application to the law school of Chungbuk National University in October 2018. Cho’s son, however, was not accepted.

The prosecution said the three people are co-conspirators of fraud that obstructed admission operations of the universities. Obstruction of business can be punished by up to five years in prison or a fine of up to 15 million won ($12,200) - a sentence serious enough for Choe to lose his newly won lawmaker seat.

At the trial, Choe denied all the charges against him. Through his lawyer, Choe argued that Cho’s son did work in his law firm as an intern. Choe also argued that the internship had nothing to do with the graduate school admissions. “It was just a single sentence in the pages-long applications,” said Choe’s lawyer.

Through his lawyer, Choe also argued that he had no intention to obstruct the two universities’ business because he had not known which schools Cho’s son was applying to. He also said the prosecutionis going after him unfairly because it only indicted him but not others who had issued internship certificates and other supporting materials for Cho’s children.

The prosecution rejected all Choe’s arguments, stressing that its investigation and indictment followed legitimate process and evidence. It also said Choe was not selected as a specific target. “We can only make an indictment when a person is suspected of having colluded with the Cho couple and there was an intention to use the fake documents for admission,” the prosecution said. The prosecution also said Choe was making groundless accusations against the prosecutors for having leaked details of his case to the media.

The court ordered both sides to submit arguments in written statements. It will create a schedule to call about 20 witnesses in the coming weeks. The next session of Choe’s trial will take place on June 2, after Choe starts his four-year lawmaker term in May.

Choe, who resigned from the Blue House in March, was elected as one of the three proportional lawmakers of the Open Minjoo Party. He was named the party’s acting chairman on Monday.