U.S. President Donald Trump said Monday that he “rejected” Seoul’s defense cost-sharing offer and pressed Korea “to pay for a big percentage of what we’re doing.”

“Now, they’ve offered us a certain amount of money, and I’ve rejected it,” Trump said at a White House coronavirus task force press briefing Monday, as Seoul and Washington struggle to sign a new bilateral Special Measures Agreement (SMA) on the upkeep of some 28,500 U.S. troops stationed in Korea. 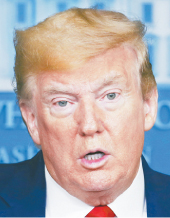 After months of negotiations, Korean officials at the end of last month indicated that the two sides were on the brink of signing a new deal after negotiators neared a tentative agreement which had Seoul paying a higher contribution than their previous accord but not anywhere near the amount demanded by Washington.

U.S. officials told Reuters earlier this month that Trump decided to turn down Seoul’s offer to raise its contribution by at least 13 percent compared to the previous agreement.

“Look, you know, we’re doing a tremendous service,” said Trump in the briefing. “We have a wonderful feeling and a wonderful relationship with each other, but we have to be treated equitably and fairly.”

However, Trump appeared to deny a report that he was personally negotiating with President Moon Jae-in terms for a reduction of U.S. troops in Korea with four possible scenarios.

“It’s not a question of reduction,” Trump said. “It’s a question of: Will they contribute toward the defense of their own nation?”

He reiterated, “South Korea is a very wealthy nation. They make our television sets. They make ships. They make everything. And I give them great credit.”

Trump in the past has floated the idea of a reduction or withdrawal of U.S. troops on the peninsula.

The absence of a new deal has resulted in the unprecedented furlough of over 4,000 Korean personnel working for the U.S. Forces Korea (USFK) since April 1 because the 10th SMA expired at the end of last year. Security analysts have expressed concerns that delays in renewing the SMA and the furlough of about half of the Korean employees of the USFK could undermine military readiness and regional security and stability.

During the Monday press conference, Trump called Moon a “friend of mine” and said he congratulated him “on having a terrific victory” in the general elections in Korea last week.

But Trump said, “We are negotiating for President Moon and for South Korea to help us monetarily,” for the presence of 28,000 to 32,000 U.S. soldiers in the country “to defend another nation” that is “8,500 miles away.”

“Before I came aboard they paid very little, if anything,” Trump claimed, despite Seoul’s past burden-sharing contributions being roughly half the total cost. “We are defending a wonderful nation, a nation that we have great relationships [with], but we are asking them to pay a big percentage of what we are doing because it is not fair.”

Trump added, “We will find out fairly soon” what is going to happen next.

In the previous 10th SMA, signed in February 2019, Seoul agreed to pay around 1.04 trillion won, which amounted to some $920 million at the time, and around 8.2 percent more than what it spent the previous year. The Trump administration initially demanded some $5 billion annually, a nearly fivefold increase in Korea’s contribution, though this amount has since been lowered to a reported $4 billion.

On Saturday, Trump called Moon to congratulate him for the ruling Democratic Party’s victory in the general elections, expressed thanks for Korea’s shipment of Covid-19 test kits and also discussed ways to strengthen the two countries’ security relationship. A Blue House official however said that the two leaders did not discuss the defense cost-sharing deal during Saturday’s phone call.

The two leaders previously held a phone conversation on March 24, which led to anticipation that a new defense cost-sharing deal could be sealed ahead of the Korean elections.

Kim In-chul, the Korean Ministry of Foreign Affairs spokesman, said in a briefing Tuesday on Trump’s demands for a larger contribution that “our government has undertaken negotiations upholding the principle of a fair and reasonable level of defense cost sharing and will continue efforts with such a position.”

When asked if Seoul is considering a new offer, Kim only replied that “negotiations are still underway” and the two sides are “working toward close consultations.”