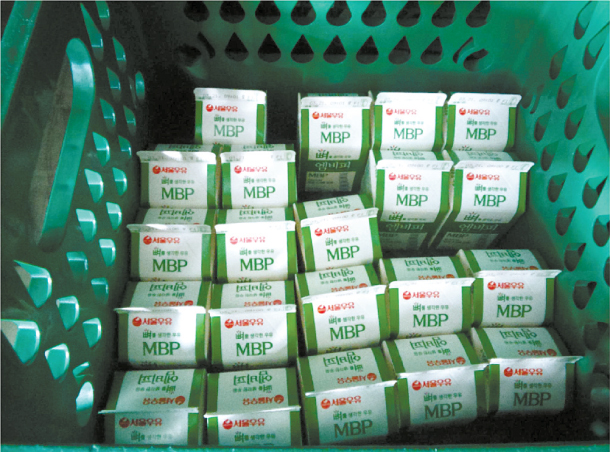 Korea is facing a dramatic milk glut, and a possible collapse of the milk market, as schooling has gone online and children are no longer getting their daily cartons at lunch.

In normal times, at least half a million of these 200-milliliter (6.76-fluid-ounce) servings are delivered each day classes are in session.

But these are not normal times. Covid-19 has forced children to stay at home and study via the internet.

The milk industry is now stuck with 10,000 tons of surplus as a result of the halt in deliveries in March and April. That’s equivalent to 8 percent of the sales during that time.

“I went through many crises such as the financial crisis, but it was never this devastating,” said Oh Yong-kwan, who has 100 head of dairy cows and produces two tons of milk everyday.

“I can feel the pain of U.S. farmers who have no choice but to dispose of the freshly-produced milk due to the plunging price of dairy products,” said Oh, who has been in the milk business since 1982.

Seoul Milk, which is also known as the Seoul Dairy Cooperative and was founded in 1937, provides about half the milk to schools and is losing 8 to 10 billion won ($6.5 to $8.1 million) of sales a month as a result of home classes. 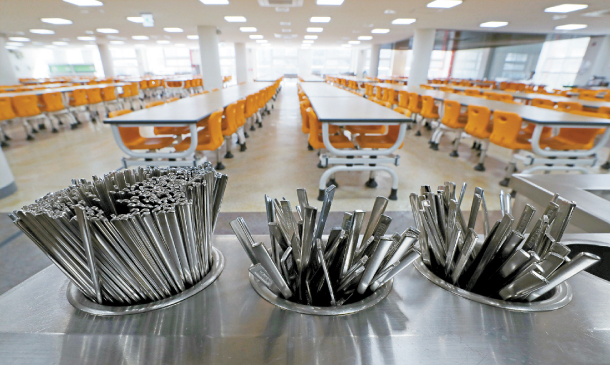 A school cafeteria is empty as elementary, middle and high school classes are held online. [YONHAP]

Korea Exchange-listed Namyang Dairy Products has a 25 to 30 percent share in this market and is losing about 5 billion won of business a month.

Consumers are benefitting as the red “special deal” tags line the shelves in the milk section. At one supermarket in Gangnam District, southern Seoul, on Thursday, 900 milliliters of milk was being offered for 3,980 won ($3.22).

Lotte Mart says it is doing its best to help the farmers by moving as much of the products as possible.

The milk industry is desperately looking for solutions. It has turned to making more stable offerings, including milk powder and sterilized milk. Sterilized milk lasts for as long as seven days without refrigeration.

It is not an ideal solution, as the extra processing adds costs and the output is not as profitable. Regardless of how many alternatives they make, the resulting sales cannot make up for the losses the companies are experiencing.

Sterilized milk also competes with fresh milk, and its sale forces down the price of fresh milk when it is introduced in great quantities into the market.

In an Organization of the Petroleum Exporting Countries or OPEC-style solution, Seoul Milk is asking producers to reduce their output in hopes that this will lead to a stabilization of prices.

While classes are set to start again next month, some internet schooling might continue.

The industry is concerned that the market disruption could lead to a collapse of the entire sector, as the lack of fixed buyers will result in a downward spiral of competition.

This has some companies calling for the government to intervene in the market to stabilize prices.