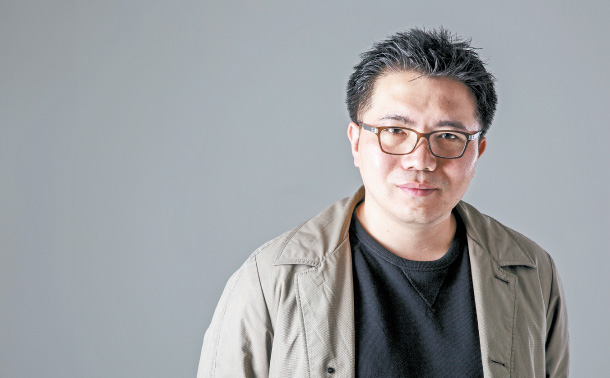 If a young woman abandons her child born out of wedlock, what kind of societal repercussion is she likely to face? It wouldn’t be surprising for people to accuse the young mother of being irresponsible, cruel even, for leaving her child alone without any help.

In the film “The Hill of Wind,” Young-boon is that girl. After her husband dies of a terminal illness, she packs up everything she has and leaves to find her daughter whom she hasn’t seen for decades. Without telling anyone, she returns to her hometown of Taebaek, Gangwon, and finds her fully-grown daughter Han-hee, who has become a Pilates instructor. Young-boon signs up for classes so that she can get to know her better.

However, the story does not follow the predictable script of a mother and daughter finally recognizing each other and vowing to never separate again.

“Young-boon is a drifter, and that’s the way she’s always has been,” director Kim Suk-young said in an interview with Korea JoongAng Daily on Tuesday at a cafe in Naesu-dong, central Seoul. “She left her daughter, and although she didn’t intend to, she leaves her former love when she thinks that she has done everything she can for him. She’s always starting afresh and some might think that her decisions are irresponsible, and some might even think that she is a bad person. But is she really?”

“It’s really scary to take on the role and all the responsibilities and obligations that follow with becoming a mother, and Young-boon is someone who’s never lived a life that way. When Young-boon and Han-hee face each other on the hill and confide that they’re scared at the end, I hoped to see them break free of all the roles and expectations they feel chained too, and see the world differently.”

“I don’t think they have to be that way,” Kim said. “They may just bond [like friends] or even just stay in touch. It doesn’t matter because I think both characters don’t want to be tied up by relationships - they just wanted honesty. I think the film had a happy ending, because now they don’t have to be caught up in the past and [they] have started to understand each other.”

Left, Young-boon (played by Jung Eun-kyoung) takes a deep breath of fresh air after coming back to her hometown Taebaek, Gangwon, for the first time in a long time. Right, Young-boon receiving instruction from her daughter Han-hee (played by Jang Seon), who runs her own gym. [SAMSUN FILM]

This may be the message the director wanted to tell all along - to get rid of all the titles that burden people trying to live up to other’s expectations.

“When a child is born, I think it would also be fine if the mother and child live separately and see each other occasionally, like friends do,” Kim said. “Or even better, I wonder [if it would be better] if people are born as adults, like they are one day suddenly born to the world fully grown, fully developed like a ripe fruit that falls from a tree. Becoming a parent, having a child, the relationship between a parent and child is so complex and too tightly bound, especially here in Korea and even more so for Korean women.”

“Women live with so many titles - a mother, a girl, an actress, daughter-in-law, sister-in-law - which come along with countless demands that they must fulfill,” Kim continued. “If they don’t comply, they are branded as unnatural, and subject to criticism. Language binds them.”

Young-boon is a character that the director wanted to live vicariously through and he hopes that his mother can do so as well.

“When I look at my mother, I’ve wondered if there was ever a moment she took for herself,” Kim said. “I thought of that when I saw her crossing the street while I was coming home from school, and at that moment I felt that I didn’t know her. She somehow looked different when I wasn’t around. Even when she’s with her friends, she feels like a different person. That’s when I thought I didn’t really understand her life.”

Young-boon does everything that his mother hasn’t done. She wanders around looking for love, and when she gets her share, she leaves without looking back. She isn’t framed or bound by titles because she can always leave them behind. She always has a chance to start over.

“I wanted to see someone like that, a bare person who isn’t bound by anything, because my mother hasn’t been able to be that person,” Kim said. “In no way can Young-boon be considered a good mother. But people’s moral judgements don’t matter to her because she can leave them. I’ve heard some people say that Young-boon isn’t relatable, but I don’t think anyone has the right to judge the way other people live. We limit people too much based on their titles.”

It wasn’t his mother’s story that he wanted to tell through the film, although he was certainly heavily influenced by her.

“Before I wrote the script for this film, I was going through a really hard time because my original film didn’t work out the way I planned it to be,” Kim said. “When I look back now, I think I was suffocating [because of titles and relationships]. For the first time in my life, I admitted to my mother that it’s been hard for me, that I even wanted to die. She asked me to come by every lunch, and after the meal we would take long walks - like for two hours - and that went on for two months. During that period we talked a lot, and in a way I felt like I was getting to know her all over again.

“She asked me to make something that wasn’t too difficult to understand, a story that her generation can see too,” Kim said. “Then, you know how the story goes - out of her back pocket, she took out 20 million won [$16,200] that she had been saving just in case, and gave it to me. And of course this old, foolish son of hers took it.” (laughs)

One unusual thing about Kim’s films is that all of his protagonists are women. His first three films - “Wild Flowers” (2015), “Steel Flower” (2016) and “Ash Flower” (2017) - depict the journey of a young homeless girl finding her place in the world through tap dance.

“Now I think of it, I’ve always used activities - tap dancing and Pilates - that I’ve never done before,” Kim said. “I was always inspired by things that were on the opposite end of the spectrum. The same goes for female characters. I think it’s because, compared to male characters, I don’t have any bias against them. The basic premise [that I have for female characters] is that I know that I can never understand their lives completely, whereas for males, I have a lot more prejudice against them because I am one, and think that I know them.

“I have this morbid repulsion against a patriarchal, male-centered perspective and the social structure of collective identity based on military culture,” Kim explained, sounding almost empathetic. “I don’t have anything against men, believe me. It’s just what I’ve felt after living for almost half a century.”