The opposition United Future Party (UFP) is asking Kim Chong-in to take over the party and help it recover from its crushing April 15 general elections defeat.

“We have conducted a survey of all lawmakers and lawmakers-elect, and the majority wanted an emergency leadership headed by Kim,” said Rep. Shim Jae-cheol, floor leader of the UFP, at a Supreme Council meeting Wednesday. “We will complete the formation of the emergency leadership early next week.” 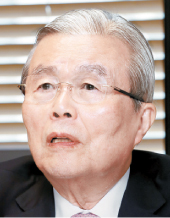 Kim, a renowned political strategist who successfully led election campaigns for both the UFP’s predecessor, the Saenuri Party, and the ruling Democratic Party, was recruited as the UFP’s chief campaign manager on March 21, just three weeks before the elections. His joining of the campaign, however, did little to stop the crushing defeat of the conservative opposition party, which had already named all its candidates.

Kim, 79, is an economist and politician who promoted the concept of “economic democracy” throughout his career. Kim was the architect of President Park Geun-hye’s victorious campaign in 2012. After a subsequent fallout with Park, Moon Jae-in, as chairman of the main opposition party, recruited Kim to reinvent the liberal party and lead its campaign for the 2016 general elections.

On Tuesday, the UFP conducted a telephone survey of its 142 lawmakers and lawmakers-elect about their plan to name Kim the interim leader. According to a party official, 140 responded.

“I will soon meet with Kim,” said Shim. “I believe he will accept our request.”

If Kim agrees, the UFP will form a national committee to confirm the interim leadership plan, and current leaders will step down. The next floor leader will likely be elected in early May, as newly-elected lawmakers start their terms on May 30.

Earlier Wednesday morning, Kim said he would agree to be the interim head of the party if he is given power unrestricted by the UFP’s constitution and regulations and an indefinite tenure.

“If they want to hold a party convention [to elect a new chairman] in July or August, they better not try to recruit me,” Kim said in an interview with CBS Radio in the morning.

He said it takes time to reinvent a party, and he didn’t know how long it would take. He said a radical overhaul will require full authority.

“[If I agree to the responsibility], I ultimately have to work to fully prepare the party for the presidential election,” Kim said, indicating that he wants to run the UFP until the end of this year, as major parties start preparations for the 2022 presidential race.

“There are two years left in the president’s term, and the process will begin starting March or April next year to select presidential candidates,” he said. According to the UFP’s constitution, a member who runs in the party’s presidential primary must resign from all elected party posts 18 months before the election.

In the interview, Kim said the UFP suffered a devastating defeat because of its controversial nominations. “I believe the party was hit fatally by some contentious nominees,” he said. “I started participating in the final two weeks of the campaign, and I have faced many unacceptable scandals.”

He said voters were upset by repeated slips of the tongue by such candidates as Chairman Hwang Kyo-ahn, Kim Dae-ho and Cha Myong-jin. “The party, however, slowly and lukewarmly responded, and the voters were disappointed,” he said.

Asked about the possibility of a merger between the UFP and its satellite Future Korea Party, Kim said there is no need to hurry. “They can merge or they can remain separate,” he said. “I don’t think there is any special effect from a rushed merger.”

Kim rejected demands for a generational change in the UFP promoted by some reformists such as Rep. Kim Se-yeon. The former head of the party’s Yeouido Institute think tank has said that the conservative party must recruit the so-called 830 generation politicians - those who were born in the 1980s, are in their 30s and went to university in the 2000s - to appeal to younger voters.

“Before the elections, I contacted many people to create a party led by the younger generation,” Kim Chong-in said. “But I don’t think that is feasible in our country. People in their 30s and 40s must present their visions and work hard [to earn their posts]. I cannot agree with the argument that we have to artificially place them in the front.”