Korea to offer its virus know-how to the world

Korea to offer its virus know-how to the world 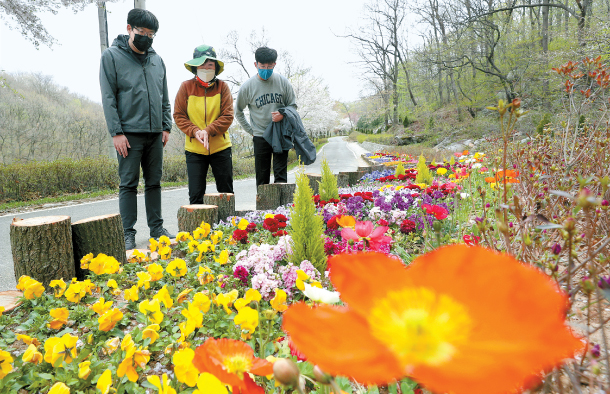 Tourists take a stroll in an arboretum on Seokmo Island, Incheon, on Wednesday as a number of state-managed forests and arboretums across the nation reopened on Wednesday as the coronavirus seems to be under control. [NEWS1]

Korea will form a Covid-19 task force to handle requests from foreign countries asking for advice on containing the outbreak and flattening their curves of infection, local health authorities announced Wednesday.

Yoon Tae-ho, a senior official in the Central Disaster and Safety Countermeasures Headquarters, Korea’s Covid-19 command center, said during a press briefing that the new task force will be led by Second Vice Foreign Minister Lee Tae-ho and include officials from the Ministry of Health and Welfare, the Korea Centers for Disease Control and Prevention (KCDC), the Ministry of the Interior and Safety and other pertinent government organizations.

The task force will hold biweekly meetings on various topics pertaining to Korea’s battle against the coronavirus and how to share the country’s know-how, Yoon said.

“About 40 countries have reached out to us so far asking for advice on Korea’s systems of customs [screening], testing, quarantine management, medical treatment and how to prevent the spread of the virus,” said Yoon. 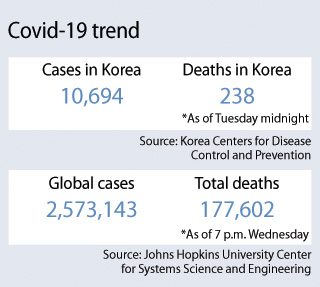 “I’m sure that cooperating with the international society and sharing Korea’s experiences will help our own efforts to [further] prevent the spread of the disease.”

Korea had 11 new infections tallied across the nation Tuesday, up from nine Monday, according to the KCDC. Korea’s total case load now stands at 10,694. As of Tuesday midnight, 238 people had died, up by one from the previous day, while 8,277 people had been declared fully recovered, up by 64 from the day before.

Of Tuesday’s 11 new cases, six were imported. Among Korea’s 10,694 total patients, 1,017, or about 9.5 percent, contracted the disease while overseas, mostly in Europe or the United States.

As the number of new infections continues to dwindle, the Ministry of Personnel Management announced Wednesday that some civil service exams will resume next month after weeks of delay. Written exams to recruit Grade 5 and 7 public servants as well as diplomatic candidates are slated for May 16 across 32 nationwide test centers, the ministry said, adding that about 12,500 applicants are expected to show up.

The ministry said it would check the applicants’ self-quarantine and immigration records as precautionary measures, meticulously disinfect the test centers before and after all exams are held, reduce the number of test-takers in each room so they can sit farther away from each other and require them to wear face masks during the exams.

In the military, enlisted service members who had been banned from leaving their bases for nearly two months due to the coronavirus outbreak will be allowed to leave for brief outings starting next Monday in case their surrounding areas have had no infections for seven days, the Ministry of National Defense announced Wednesday.

Before a ban was put in place, enlisted soldiers were normally allowed to leave their bases twice a month for four hours from 5:30 p.m. on weekdays. That system will resume.

The Defense Ministry said it would further discuss whether to allow soldiers to take vacations and allow their friends and family to visit them.

Daenam Hospital in Cheongdo County, North Gyeongsang, to which 115 infections were traced in February and March, finally reopened Monday after receiving permission from the North Gyeongsang Provincial Government. All but the psychiatric ward - where many cases were traced - and the emergency room opened, the hospital announced Wednesday.

The hospital, located near Daegu, which was the epicenter of Korea’s Covid-19 outbreak, saw 115 infections in total, 113 of whom were hospitalized patients. The rest were medical staff. Nine of the infected patients died, and 14 are still being treated in other larger hospitals.

As Korea’s daily new infections keep dropping, health authorities Wednesday announced a set of health guidelines for people to follow individually once a new social distancing campaign kicks off on May 6.

If the situation continues to improve, the central government said it will kick off an even looser social distancing campaign on May 6 focused on advising the public to incorporate good hygiene habits into their everyday lives.

Five key rules to follow individually under the forthcoming campaign, said the Central Disaster and Safety Countermeasures Headquarters on Wednesday, is for people to stay home for three to four days if they feel sick; keep about an arm’s-length distance between others; wash their hands frequently and meticulously; cough into their sleeves and not their hands; ventilate and disinfect their environments at least twice a day; and remain close to friends and family “by heart” while staying physically apart.

In other rules for individuals to follow, the headquarters advised people whose job requires meeting a lot of strangers, such as taxi drivers, couriers and restaurant workers, to wear face masks at all times. Elderly people aged 65 or above were advised to refrain from leaving their homes.

Further details specific to industries will be introduced gradually in the coming days and uploaded on the Health Ministry’s official website at http://www.mohw.go.kr/eng