Globalization’s impact on the coronavirus pandemic

Globalization’s impact on the coronavirus pandemic 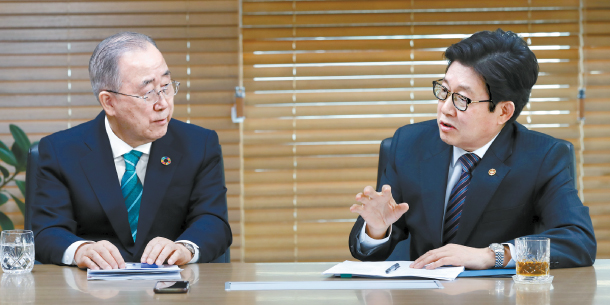 Ban Ki-moon, left, a former United Nations secretary general and chairman of the Council of the Global Green Growth Institute, and Korean Environment Minister Cho Myung-rae, discuss on April 16 the impact of the coronavirus pandemic on air pollution ahead of the 50th Earth Day at the National Council on Climate and Air Quality office in Jongno District, central Seoul. [BYUN SUN-GOO]

The new coronavirus is currently the most prevalent issue in the world, with some warning that the pandemic is a calamity resulting from climate change and the destruction of the ecosystem. However, as the world has entered lockdown mode, paradoxically, the Covid-19 pandemic has led to a drastic improvement in air pollution.

Ahead of the 50th anniversary of Earth Day, celebrated Wednesday, the JoongAng Ilbo hosted a dialogue on April 16 with former UN Secretary General Ban Ki-moon, the chairman of the Council of the Global Green Growth Institute (GGGI), and Environment Minister Cho Myung-rae, to analyze the impact of Covid-19 on the Korean environment and to discuss the reduction of the fine dust particle level and greenhouse gas emissions.

Earth Day, celebrated each year on April 22, marks the anniversary of the birth of the modern environmental movement in 1970. Former U.S. Sen. Gaylord Nelson of Wisconsin and young activist Denis Hayes, the coordinator for the first Earth Day, set in motion the movement to raise public consciousness about air and water pollution, mobilizing 20 million Americans. Earth Day became a global event in 1990 bringing together 200 million people in 141 countries.

The Korean government enforced measures as a part of efforts to reduce fine dust pollution in the winter season between December and March the following year, which included a ban on Grade 5 emission vehicles and a reduction in the operation of coal-fired power stations.

Last month, the Korean Cabinet approved an amendment to the fine dust law, introducing a set of measures to better fight air pollution to enable the government to restrict the operation of vehicles, coal plants, construction and other major emission sites during the peak period between December and March. The seasonal management system was first introduced as a one-off scheme, but under the revision, the environment minister and heads of local governments will be required to implement such measures during the winter season each year to manage fine dust levels.

Cho is an environment expert who previously served as president of the Korea Environment Institute and headed the Council of the Heads of Environmental Research Institutions. 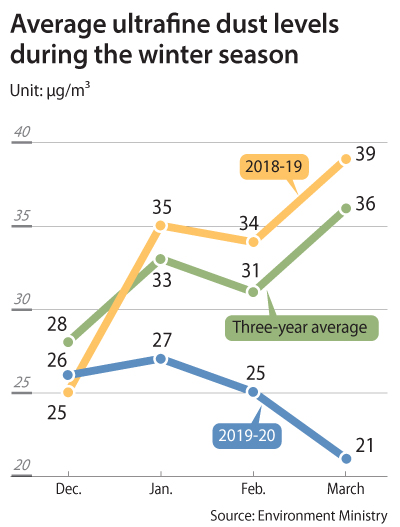 The following are edited excerpts from the dialogue.

Q. The fine dust level in spring of last year was extremely severe, but this year was much improved. What is the reason?

Cho: It can be divided into three main factors: an effective policy, meteorological factors and Covid-19. The most important factor is effective policy. While reduced economic activities took full swing in March, the fine dust levels in January had already decreased by 24 percent [compared to the same month last year]. In March, it decreased by 43 percent. China in the Beijing, Tianjin and Hebei areas also saw fine dust levels drop by around 11 percent. If China is seen to be contributing to around 30 percent of the fine dust in Korea, its effect on us shrank by 3 percent. Thus, the phenomenon cannot be explained just by the improvements in China.

This month marks the one-year anniversary of the National Council on Climate and Air Quality. What did the NCCA achieve thus far and what are its future plans?

Ban: The policy to improve fine dust levels was undoubtedly effective, and an even more important aspect is public participation. In order to collect feedback, we held 210 meetings. On Sept. 23 last year, President Moon Jae-in proposed at the United Nations Climate Action Summit to designate an “International Day of Clean Air for Blue Skies” [adopted by a UN resolution to be observed on Sept. 7 to push for higher international awareness of air pollution and a joint global response to it]. This is the first time the United Nations has adopted an international day proposed by Korea.

This year, we decided to announce mid- and long-term measures to reduce fine dust particles. There are important decisions to be made on important issues including energy mix and fair electricity rates, and I believe there will be close cooperation with government agencies, political circles, civil society and industries.

Cho: Last year, the foundation for measures to combat fine dust including the seasonal management system, the eight fine dust bills and procurement of a budget were established. This year, we need to use the established infrastructure to see results. In the larger picture, fine dust policy is dividing into two directions: science and localization.

While humankind has faced great threats from Covid-19, air quality has improved and the ecosystem is being revived. What is the significance of this coronavirus paradox?

Ban: While this is an unfortunate situation, in some ways, it is an opportunity to raise awareness about the climate change crisis. Following World War II, I don’t think there has been a situation where the entire world has been under lockdown and fearful. In some ways, humankind is learning a good lesson that we cannot negotiate with nature. Because we cannot stop nature, humans have to adapt to and follow nature. There is no Plan B for climate change. There is no other plan. There is a need for us to more humbly strengthen policy on climate change.

Cho: Covid-19 is one result of neoliberal globalization, I think, and if you put it negatively, a failure of neoliberalism. Hypermobility transcending borders and hyperconnectedness inevitably contribute as collateral to the process of more energy and power consumption, and this has an impact on the natural ecosystem. Amid an artificial disturbance to the ecosystem, the virus mutates in the midst of a hyperconnected society and spreads across the globe. The phenomenon can be seen as an environmental crisis brought about by globalization.

Ban: Korea was able to respond well to the coronavirus because all the systems were in place and local autonomy also functioned well. It is difficult to see a case like in Korea where people were so unified in trying to overcome the coronavirus crisis. In the 21st century, there was SARS [severe acute respiratory syndrome], swine flu, MERS [Middle East respiratory syndrome], Ebola and the Zika virus, and the cycles in which such viruses are appearing are getting shorter. If the international community doesn’t take this opportunity to establish a sound system, then a larger disaster may come about.

Ban as UN secretary general established the Sustainable Development Goals (SDGs), which addresses global challenges to achieve by 2030 including action to combat climate change. How do you assess its progress over the past five years?

Ban: Frankly speaking, the passion by various countries toward climate change has greatly weakened and it is seriously questionable if the SDGs will be achieved by 2030. Climate action is Goal 13, but if we do not respond properly to climate change, the 17 goals are almost meaningless. Unfortunately, Korea is also criticized quite a bit regarding climate change. We need to advance our industry among many matters and put more weight on domestic issues. I think it’s a regrettable situation as a former secretary general.

Cho: Our goal is to cut greenhouse gas emissions by 24.4 percent by 2030 compared to 2017, and truthfully, taking into consideration our economic structure, Korea’s current target is not remarkably lower than those set by other countries. Korea’s criticism on climate action is not on what we are planning to do but rather because of how we have thus far lived. We remain an export-oriented economy, we manufacture products and sell them to earn a living. In order not to become an enemy of climate change, we need to change this. Rather than just reducing greenhouse gas emissions, we need to proactively discuss and negotiate how to change our industrial structure.

Recently, we have been working toward various measures to reduce greenhouse gas emissions, and I am certain that such efforts will be accelerated. We have shut down 10 coal-fired power plants, the most important source of greenhouse gas emissions, and plan not to build any new plants. Through this year’s seasonal management period, we have closed 28 coal-fired power plants, and I think it will be possible.

We also see it as a good sign that greenhouse gas emissions in Korea are expected to decrease this year. Until now, they have increased, but starting from last year, according to our internal review, we are expected to enter a decreasing trend. The Environment Ministry sees this year as the first year of decoupling in which greenhouse gas emissions will be reduced and the economy will be advanced. Officially we have a 2050 carbon neutrality goal, but a net zero emissions scenario that I have pushed for is also included.