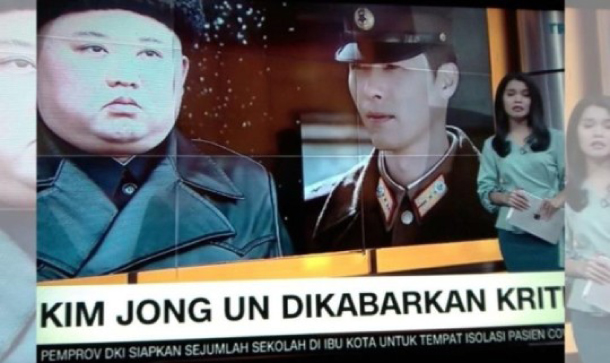 CNN Indonesia apologized after airing a photo of North Korean leader Kim Jong-un and South Korean actor Hyun Bin side by side in a news report about Kim’s health.

As a news anchor from CNN Indonesia was reporting on Kim’s questionable health on Tuesday, a screen behind her showed photos of Kim and Hyun Bin side by side. Hyun Bin played a North Korean solider named Captain Ri in the recent hit drama series “Crash Landing on You.”

“The news package was on the issues surrounding Kim Jong-un, who was reportedly in critical condition, which has no relation to the Captain Ri character in the Korean drama series. This error was not intentional, and we apologize for this mistake,” a CNN Indonesia news anchor said later on Tuesday, according to Coconuts Jakarta, a local branch of a media company headquartered in Hong Kong.

CNN Indonesia reported on Hyun Bin earlier in the month, and used the same side-by-side photo in question for a story titled “Kim Jong-un Called More Attractive than Hyun Bin in North Korea.” The report was about who North Koreans consider to be more attractive.

“It is not accurate to say that Hyun Bin is considered handsome in North Korea. Someone like Ma Dong Seok is even more popular in North Korea,” South Korean YouTuber Park Yoo-sung said during the report.

“Crash Landing on You,” which aired from last December to February on channel tvN was the top-rated drama in tvN’s history, exceeding initial expectations about how well a show that told a love story between a North Korean and a South Korean woud fare at a time when bilateral relations have faltered.