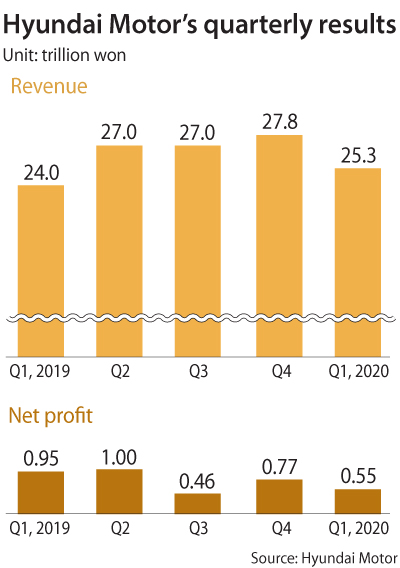 The automaker did beat expectations, and it benefited somewhat from the weaker won, but it forecasts that the drop in second quarter results will be far greater as demand in major markets is set to remain weak.

Hyundai Motor announced Thursday that its revenue in the January to March period rose 5.6 percent to 25.3 trillion won from 24 trillion won during the same month a year earlier. Financial data provider FnGuide predicted earlier that Hyundai Motor would post 23.21 trillion won in sales for the quarter.

In the first quarter, Hyundai Motor said it sold a total of 903,371 vehicles, down 11.6 percent from 1.02 million units a year earlier. It is the first time since the third quarter of 2011 that Hyundai Motor’s quarterly sale volume fell below one million units.

While Hyundai Motor’s operating profit for the first quarter was up 4.7 percent on year to 864 billion won, the company said the increase was only due to a one-time 105.6 billion won adjustment related to the establishment a joint venture with Aptiv.

In the first three months the year, Hyundai Motor launched the GV80 SUV, the G80 premium sedan and the seventh-generation Avante compact sedan, also known as the Elantra.

The company had to halt production for a number of days in February due to a halt in the supply of wiring harnesses from China. The automaker also had to close all of its overseas factories except in China last month as the novel coronavirus spread to nearly all parts of the world.

But Hyundai Motor believes that the drop will be even more extreme in the second quarter as the coronavirus pandemic has started heavily affecting sales and production activities in major auto markets like North America, Europe and India.

“From the Covid-19 outbreak, it is unlikely that we will see a V-shaped recovery moving forward,” said Hyundai Motor CFO Kim Sang-hyun in a conference call.

“We are reviewing a number of various scenarios internally, but it is inevitable that earnings will take a hit as foreign markets’ dealership activities and factories come to a halt. We are focused on making our production schedule flexible and finding other means of car sales.”

Hyundai Motor said it will direct its production toward the domestic market to offset the sharply lower demand for new cars in other markets.

The company said its car sales in Korea rose 10 percent in March due in part to the popularity of newly-released models and the government’s discount on individual consumption tax for new car purchases.

In other markets, Hyundai Motor forecasts that sales declines will continue as a result of social distancing campaigns, factory closures and travel restrictions preventing people from buying new cars. As many of the major markets started to face the coronavirus pandemic in mid-March, Hyundai Motor said the impact of the global pandemic was not fully reflected in the first quarter.

To minimize the impact of the sales and profit dip in the second quarter, Hyundai Motor said it will continue to launch cars online and expand its non-face-to-face sales activities. The company is planning to stabilize its supply chain of auto parts with more sources and sell more higher-value products.