U.S. assumes Kim Jong-un is in ‘full control’ of the North’s military

U.S. assumes Kim Jong-un is in ‘full control’ of the North’s military 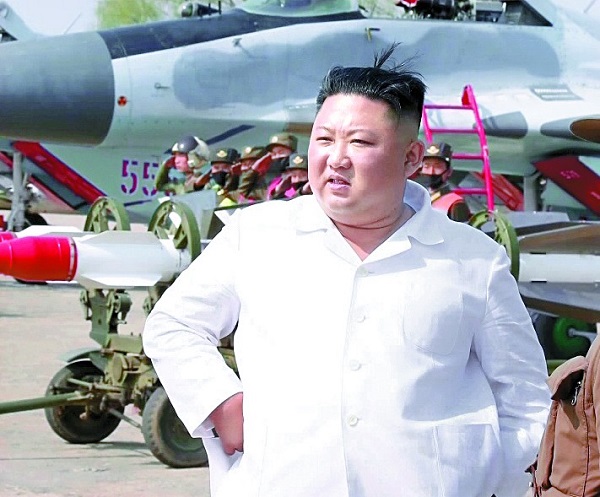 North Korean leader Kim Jong-un is in full control of the country’s nuclear and military forces, said the No. 2 commander of the U.S. military Tuesday.

In a press conference at the Pentagon, Vice Chairman of the Joint Chiefs of Staff Gen. John Hyten said he had no intelligence suggesting Kim had fallen ill — as per a recent CNN report, meaning Kim likely remained in “full control” of the North’s military forces.

“I have no reason not to assume that,” he said.

Kim, who has not been seen publicly for two weeks now since his last appearance on April 11, was speculated to be in bad health owing to a cardiovascular surgery, according to CNN’s bombshell report this week.

South Korea’s Unification Ministry Thursday told reporters that Seoul has yet to find evidence of Kim’s supposed illness, noting that the North continues to issue correspondence with foreign leaders in Kim’s name.

North Korean state media on Thursday reported that Kim had sent a message to Syrian President Bashar Al-Assad thanking him for his congratulatory message on North Korea’s anniversary of the birthday of its founder, Kim Il Sung, on April 15.

With regards to Kim Jong-un’s conspicuous absence from a tribute ceremony at the Kumsusan Palace of the Sun, the mausoleum where Kim Il Sung lies in state, a Unification Ministry official said it was too early to regard the dictator’s nonattendance as a sign that something was wrong with his health.

South Korean intelligence officials believe Kim is staying at a special villa in Wonsan, Kangwon Province, which has become a favorite residence of his outside of Pyongyang. One South Korean official who requested anonymity said Kim has recently governed the country from the location, along with close confidantes like his younger sister Kim Yo-jong and Vice Director of the Organization and Guidance Department (OGD) Jo Yong-won.

Several other sources with knowledge of the inner workings of the North Korean elite say Kim’s villa is situated at a site around 2 kilometers (1.2 miles) from Wonsan’s city center, on a delta flanked by two rivers flowing into the East Sea.

Satellite footage of the location revealed around a dozen large buildings in the area, along with facilities like a football field and several other supporting buildings. Many of these facilities appeared to be designed for leisure purposes.

With the area appearing fortified and closed off from access from the west via an artificial lake, images showed an airstrip and a special train station at the location. A more recent photo showed the airstrip had been replaced with a horse-riding track.

“[The villa] is 17 kilometers away by sea from the Hodo Peninsula, which North Korea uses as a missile launching site, and 6 kilometers away from Wonsan Kalma International Airport, which makes it an accessible location but one that is also sealed off from external contact,” said Ahn Byeong-min, a researcher at the South’s Korea Transport Institute.

Kim’s absence from the public eye has also fed speculation as to who would assume control over the levers of power in the North should he be incapacitated.

One high ranking South Korean official told the JoongAng Ilbo that recent intelligence suggested his sister Kim Yo-jong has rapidly risen through the ranks recently to assume the post of first vice director of the OGD, one of the most powerful party organs in the country with control over appointments.

In March, state media in the North reported OGD director Ri Man-gon had been sacked from his post as vice chairman of the ruling Workers’ Party Political Bureau. South Korean and U.S. intelligence believe the post of OGD director has been left vacant since, but that Kim Yo-jong has been exercising de facto control of the body.

If true, that would make Kim Yo-jong the effective No. 2 figure in the regime. The younger Kim’s elevated status in the North has also manifested in the role she has played in the North’s public messaging, like her aggressive statement attacking the South in March as well as her statement confirming her brother received a personal letter from U.S. President Donald Trump late last month.

The younger Kim reportedly played a key part in crafting her brother’s public image and has acted as his surrogate on various diplomatic engagements with South Korea. Her rise through the ranks of the regime’s propaganda and agitation department and now the OGD mirror the steps her father, former leader Kim Jong-il, took before he consolidated his succession to his own father, Kim Il Sung.

Not all are convinced, however, that a young woman like Kim Yo-jong can be considered a possible successor to the regime’s leadership.

Thae Yong-ho, the former North Korean ambassador to Britain who was elected as a lawmaker of the conservative opposition United Future Party in South Korea this month, said on a radio program Thursday that Kim Yo-jong was a “complete greenhorn,” and that a more viable candidate can be found in Kim Pyong-il, Kim Jong-il’s half-brother who was recently repatriated back to Pyongyang after decades serving as a diplomat in Europe.