In a photo posted on Facebook late last month, four middle school students brazenly posed in the waiting room of a police station.

The caption on the picture read “Preparing to ditch the Gumi police,” and was just the first in a series of encounters with police that ultimately ended in a fatal accident that left an innocent 18-year-old bystander dead. 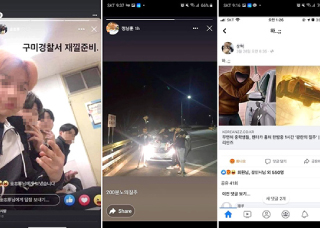 But how were these teens able to continue their crime spree despite numerous encounters with police?

In Korea, anyone aged 14 or under is immune to criminal prosecution.

The group’s first arrest came after they stole a rental car and robbed a convenience store at a gas station.

They would be arrested twice more, once on March 23 and again on March 25. Each time, they would be released without any criminal charges.

They also continued to chronicle their so-called escapades on social media. In one photo, “Fast and furious at 200 [kilometers (124 miles) per hour],” they strike victorious poses in front of a stolen rental car.

On the night of the fatal incident, the elementary students stole a rental car in Seoul and by midnight were tearing through the streets of Daejeon, some 140 kilometers from the capital city, with police on their tails in a high-speed pursuit.

In order to evade arrest, the middle-schoolers ran a red light, blindsiding an 18-year-old motorcyclist who was halfway through the intersection. The young man was working a part-time delivery job to support his college tuition.

The car hit the motorcycle with enough force to fling the shrapnel across the screen of an onlooking street camera.

The motorcyclist died shortly after being transferred to a hospital.

Even after the collusion, the students did not stop the car.

They drove another dozen meters before abandoning the vehicle and fleeing on foot.

Along with the group of four middle-schoolers were four other passengers.

All eight were 14 or under.

Most of the passengers were apprehended in the vicinity, but the driver managed to make it all the way back to Seoul before being arrested.

A representative of the Daejeon Dongbu Police Precinct, who directly investigated the incident, said that the students “did not seem to repent for their wrongdoings. In fact, they did not seem to realize the gravity of the situation at all.”

In subsequent social media postings the minors wrote, “[Expletive]. Killed a person. We’re screwed,” and attempted to fend off internet naysayers with the question, “You think I killed him because I wanted to kill him?”

Of the eight passengers, three were turned over to a juvenile classification review center - essentially a pre-detention center where minors are detained until their cases are reviewed.

However, in Korean law, regardless of the crime, the maximum punishment for those aged 14 or under is two years at a youth detention center. Also, the crime will not remain on their criminal records.

The other five passengers were allowed to return to their families.

Before entering the juvenile classification review center, one of the offenders managed to write a casual farewell on his social media, “Be sure to write me letters, and I’ll see y’all again in a month.”

After the incident made headlines last week, the deceased motorcyclist’s girlfriend posted a petition on the Blue House website, calling for the teens to be punished severely for the fatal hit-and-run.

As of Monday, the petition garnered more than 870,000 signatures, testifying to the massive public outrage.

“The teens have committed a terrible crime in which a life was lost. Please punish the perpetrating youths […] so that such an incident does not repeat itself,” the petition read.

Cheon Jong-ho, a judge who presides over juvenile court cases, noted that the flaunting of their crimes on social media and their general apathy is not because the students are inherently violent, but because they are unable to assess the impact of their actions due to their immaturity. He emphasized the need for a moral education that emphasizes respect for fellow human beings.

But this was not an isolated incident.

Last Saturday in Yongin, Gyeonggi, three students - all 14 years of age - stole a car and collided with an SUV crossing an intersection while trying to evade police.

Two of the students flew on foot while the third was immediately transported to the hospital with non-life threatening injuries.

The driver was apprehended later in the day.

Luckily no one was seriously injured, but regardless of the impact the crime may have on the victims, none of the young perpetrators will face any legal repercussions for their actions.

The National Police Agency reports that from 2015 to 2018, a total of 28,000 minors committed crimes. Of this number, 77 percent were murder, theft, or assault.

But according to Cheon, while it may seem like crimes are becoming more violent in Korea, a careful study of statistics reveals that this is not the case. In fact, Cheon argues, social media is playing a significant role in exposing crimes to a larger audience, creating the illusion that violence is becoming more rampant.

While the legal system and the police have their hands tied in regard to such incidents involving minors, some members of the public are taking matters into their own hands by revealing the personal information of the students.

In the case of the students behind the fatal motorcycle hit-and-run, their social media accounts, names of their family members and some of their cellphone numbers have been disclosed.

The release of this information has led to them receiving hate mail and death threats.

The incidents have also come at a sensitive time in Korea when controversy is rampant over the alleged involvement of minors - by legal definition, those who are 18 years old and under - in operating a massive online pornography ring that enslaved dozens of women and young girls.

On Friday, for the first time ever in Korea, the police had disclosed the identity of Kang Hoon, an 18-year-old suspected co-conspirator in the violent and degrading pornography ring. While he can be criminally prosecuted, minors such as Kang are usually exempted from having their identities disclosed.

The presiding panel decided to release Kang’s personal information to the public after it balanced the public benefits in terms of the prevention of similar crimes in the future against the harm caused to the suspect and his family.