Colleges mull full return by May

Colleges mull full return by May 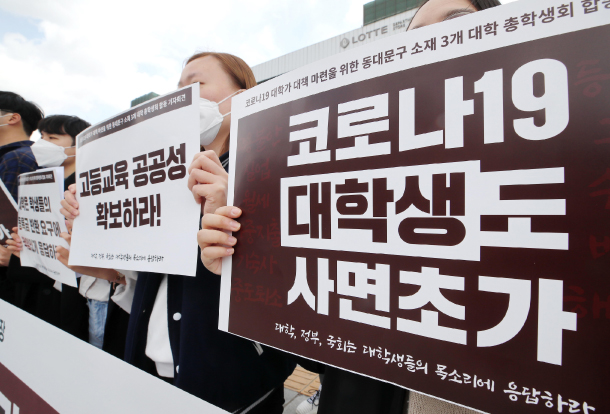 College students hold a joint press conference to demand that universities give full tuition refunds to students at Cheongnyangni Station in eastern Seoul on Thursday. [YONHAP]

Universities have kicked off the spring semester with online lessons amid continued coronavirus concerns, while some have resumed offline classes for subjects deemed absolutely necessary.

However, most universities have yet to decide on when to completely reopen their campuses for the new school year, though there have been internal discussions that some return to normalcy could come in May.

The main reason behind this speedy return is the increased demands from students for a refund of their tuition.

On Thursday, the student councils of Kyung Hee University, the University of Seoul and Hankuk University of Foreign Studies held a press conference in Cheongnyangni Station Plaza in central Seoul to demand a refund of their tuition.

The student council members of these Seoul-based universities argued that as colleges are not running properly, their right to learn is being infringed upon and that their livelihood is being imperiled. They also said the government should not evade responsibility if they don’t have proper laws to enforce such a tuition refund and further demanded an expansion of the budget for higher education.

One student representative said, “Universities need to stop giving lame excuses and respond responsibly to our demands for tuition refunds.”

On Tuesday, the National University Student Council Network, or Univnet, also held a rally in front of the government complex in central Seoul to demand tuition refunds.

The network conducted a survey of 21,784 university students nationwide, and 99.2 percent of respondents said that a tuition refund was needed.

Of those who demanded a refund, 82 percent said that the biggest reason was because “remote classes are not up to par,” while 72 percent also cited not being able to use school facilities.

However, universities are indicating that a tuition refund will be difficult because of their financial situations.

A faculty member of a private university in Seoul said, “It’s not like we are cutting our academic faculty because we are holding online classes. With the tuition, we are funding the salaries of staff and the necessary apparatus to conduct classes online, so a refund is impossible.”

While understanding students’ frustrations, university faculty members say that holding online classes does not save that much budget compared to holding physical classes other than a cutback in some electricity and utility fees - hence, schools are not in the financial position to be able to refund students.

The amount of refund students are expecting and what is actually being considered by universities also varies drastically.

Keimyung University in Daegu, which has an average yearly tuition of over 7 million won ($5,700), gave a 200,000 won grant to all their students. But students are not expected to be satisfied with this amount.

Universities have been discussing the need to reopen offline classes as early as next month as a means to appease the growing dissatisfaction of students over subpar online courses.

The faculty member for the private university said, “At one point, we reviewed holding the entire spring semester online, but if we don’t have physical classes for at least one or two months, the dissatisfaction is expected to grow even more. The students have to come to school so that we can meet them in person and appease them.”

But when universities can actually reopen campuses is another matter.

Universities are paying close attention to when elementary and secondary schools will resume their offline classes after they kicked off their new school year online in three batches earlier this month. The Education Ministry is expected to make a decision in early May on when to reopen elementary, middle and high school classes under continued social distancing efforts despite a sharp decrease in new coronavirus cases.

Korea University through an internal meeting Wednesday decided to hold limited offline classes starting May 11. Even schools that have yet to determine when to kick off classes are anticipating a similar date.

However, there are also those who remain concerned that universities have weaker quarantine measures in place than elementary and secondary schools. While elementary, middle and high schools have a set number of students in a fixed location, who can be regulated by their homeroom teachers, that is not the case for universities. Students move around various buildings on their university campuses and are generally difficult to regulate.

A university professor in the metropolitan area said, “If a confirmed case is found at a university, it would be more chaotic. We need to decide when to reopen our campus taking into serious consideration students’ dissatisfaction and concerns of contracting the virus.”