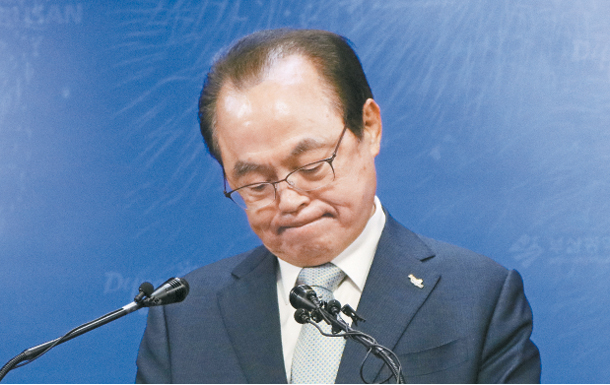 Busan Mayor Oh Keo-don holds a press conference to announce his resignation on Thursday after admitting to molesting a City Hall employee. [NEWS1]

The ruling party said Friday it will hold a disciplinary committee meeting next week to decide a punishment for former Busan Mayor Oh Keo-don, who resigned after admitting to sexually assaulting a public servant of the city.

“The Democratic Party [DP] offers a sincere apology to the victim, Busan residents and the people for Oh’s wrongdoings,” said Rep. Lee In-young, floor leader of the ruling party, on Friday. “We will hold a meeting of the ethics tribunal as soon as possible to punish him.”

The DP will hold the ethics tribunal meeting on Monday to decide a punishment against Oh. Many DP leaders said he must be expelled.

Oh held a press conference on Thursday and announced his resignation, confessing that he had sexually assaulted a female public servant of the Busan Metropolitan Government. The 71-year-old politician was the first DP mayor of the southern port city, a conservative stronghold. Oh won the election in 2018 after three unsuccessful runs.

It remains to be seen if the DP will field a candidate to the Busan mayoral by-election, scheduled for April next year. Article 95 of the DP’s Constitution stated that that party will not field a candidate in a by-election if the vacancy is created by its member who has lost the post for a grave wrongdoing such as corruption.

The DP, however, rejected the opposition United Future Party (UFP)’s demand that a parliamentary investigation must take place into the suspicion that the party leadership had conspired with Oh to schedule his resignation after the general election. “It is absurd to argue that we had known about what had happened before the election,” said Yun Ho-jung, secretary general of the DP, in a radio interview. “We first learned about it yesterday.”
Meanwhile, Busan police started an investigation into the sexual assault.

Police are also looking into another allegation raised last year that Oh had sexually assaulted another female public servant.