After 13 years, Yang finally bags the title of MVP

After 13 years, Yang finally bags the title of MVP 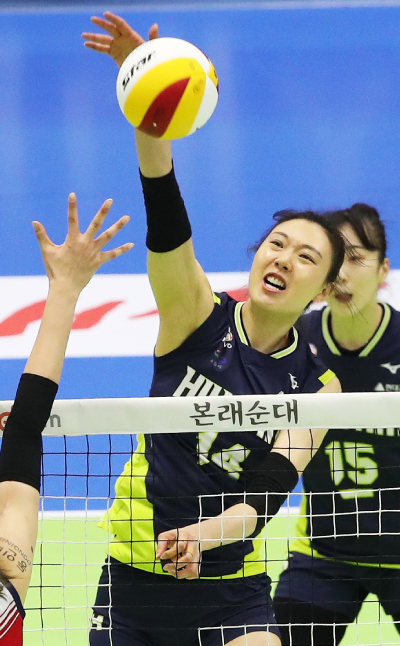 Yang Hyo-jin of the Hyundai Engineering & Construction Hillstate swings during a game against the KGC Pro Volleyball Club in Suwon on Jan. 23. [YONHAP]

It took 13 seasons for the Korean Volleyball Federation (KOVO) to finally name center Yang Hyo-jin of the Hyundai Engineering & Construction Hillstate MVP of the season.

Although KOVO’s 2019-20 season ended earlier than expected due to the coronavirus, the league still held voting for the MVP, and after receiving 24 of the 30 votes Yang was named the regular season MVP on April 9.

Despite the season ending early, the winner for the regular season was named but the postseason was canceled. In 24 games she scored 409 points and made 81 blocks, averaging 0.84 per set.

Despite the setbacks, the season was still a meaningful one for Yang, as her team took the title with 20 wins and seven losses, totaling 55 points. Yang was Hillstate’s starting center and also the team’s captain.

She’s also topped the league for 11 consecutive seasons, proving that she’s not just this season’s MVP, but KOVO’s best center in history.

Along with KOVO, she’s also been a crucial member of the Korean national women’s volleyball team, competing at both the London and Rio Olympics, and helped Korea earn a spot at the Tokyo Olympics; as well as the Asian Games and a number of FIVB events.
Below are edited excerpts of Yang’s interview with Ilgan Sports.

Q. I’ve heard that you are spending your vacation days. Do you feel like a burden has been lifted from your shoulders now?

A. If the season didn’t end earlier, it would have been a more perfect season. So I have some regrets, but I’ve had such an enjoyable season. There were a lot of good things happening to me, personally. In addition to that, I got to look back at my volleyball career.

Do you regret that your team didn’t get a chance at the championship title?

After we won the 2019-2020 season, instead of thinking about how well I played, I thought more about how well we played. That great feeling became a constant, and I believe it led to us ranking at the top of the league. My thirst for victory grew. There are younger players who didn’t get to play the championship or playoff games. I wanted to win and enjoy those feelings together. All our teammates were disappointed about this, and I was too.

Hillstate’s strong teamwork stood out in every game. That also means you as a leader stood out. How did that make you feel?

There were a lot of close victories. We were gaining wins but we had to be aware of settling. I told my teammates to remember our 11 straight losses since the opener last season. I said that so our players didn’t forget that desperate feeling. These days, the younger players seem to be more mature than when I was their age. Rather than getting excited, they focused on each game. It’s not just me. Everyone played well.

Toward the end of the season, your team’s libero got injured, and that seemed to be the cause of some struggle. Can you tell us about that situation?

Our replacement [Lee] Young-ju probably lost some confidence. Since that was also the time when I started to get tired, I still feel disappointed about not being able to help her. First, we were too conscious of [Kim] Yeon-gyeon’s absence due to injury. We weren’t able to play as one team and we were getting buried by our bad plays. So I told everyone to improve their mindset and to their best to fulfil their roles. It was something I was telling myself, too. Thankfully, such mindset affected our team in a positive way.

Last season, Hillstate finished fifth. How did you feel about regaining the top spot in the KOVO standings?

This result was something that I wasn’t even expecting. We were picking up wins in weird ways and still maintaining our spot at the top of the standing. Since we lost one too many matches last season, I think our team just focused on winning and tried to forget about the past. And then at one point, we were ranked first.

It’s been 13 years since you made your pro debut in KOVO and finally won the MVP award. How do you feel?

It’s not an award I can get by setting my focus on achieving it. Looking at past seasons, where I had great personal statistics, I was considered as one of the candidates but didn’t win. So I wasn’t being greedy. I also had the help of our coaches, teammates and the club. This isn’t an award that’s solely for me. Encouragement from the fans when we were struggling also helped a lot. I’m thankful to everyone.

What does this award mean to you?

I just consider this as a medal for consistently staying at a certain level. Since I received the award later in my career, it’s more meaningful.

You became the first center in 15 years to win the MVP award — since Jung Dae-young. What does it feel like to break the mold?

My dreams grew by watching players like Dae-young, [Chang] So-yun and [Kim] Se-young. When Dae-young won the MVP award, I remember her seeming surprised because she couldn’t believe that a center could win such an award. Honestly, my goal wasn’t to re-enact another center winning the MVP. I just got to this point by taking it one step a day. It still amazes me.

Did you get a congratulatory message from your best friend and the top volleyball player in the world, Kim Yeon-koung?

Actually, she was the one who blew my mind by telling me that I’m going to be named the MVP. And she even video called me during the awards ceremony. She complained so much that I didn’t pick up her call. But she did congratulate me by telling me that this is the result of my hard work. I’m always thankful [for her].

During the awards ceremony, you thanked your parents. How did you celebrate the achievement with your family?

I came home for the first time in a while, and in one area in the house, there were albums. I was really touched by it because they were scrapbooks of all the newspaper articles or internet articles about me since I was little.

Was that the first time you found the scrapbooks?

It was, and there were a lot more than I expected. My parents normally don’t react to good or bad things. But now, when I come home after the season ends, or leave to get started on the season, they welcome me and express their sadness. I didn’t feel it when I was little, but now I know how much the two of them talk about me. I’m very thankful for all their support and understanding.

You’ve achieved a lot of records as the “first.” If you had to choose one, what would be the one record that you are the most proud of?
Well it would have to be something related to blocking. I spent the most time and effort in that area when I played volleyball. I have an affection toward that.

Now, when there’s young potential centers in the league, they are called the “second Yang Hyo-jin.” How do you feel about that?
There will be younger players who will be better than me. I’m thankful that they’ve added my name in there, but to be honest, I’m a little embarrassed. I still need to improve.

Were you disappointed by the news that the Tokyo Olympics has been postponed for a year?

I’m trying to think of it in a positive way. It’s a relief that it didn’t get canceled. This season, we’ve had a lot of injured players. If we can participate [in the Tokyo Games] when we are in better condition, then I think we can achieve a better result.

You are still at the peak of your career, but you said this could be your last Olympics. Why?

Looking at senior players, even the glittering stars reached a point where they couldn’t play volleyball well. I’ve seen it since I was little, and that moment will come to me too. I’m still taking good care of my body, but I don’t know what kind of variables I’ll face. I just thought it’ll be good to be prepared mentally. I wanted to feel free.

What do you mean by “feeling free?”

Playing through this season, I thought a lot about what my life would be after I quit volleyball. My life without volleyball will feel very empty. So I thought that I shouldn’t leave any regrets of having more fun, when that day comes. Training and just the sport itself will be difficult moving forward, but I want to be able to evaluate myself at a higher level and I want to actualize my dreams.

Women’s volleyball is one of the most popular sports in the country right now. And you are one of the athletes to experience that growth in popularity. How was that?

Along with [Kim] Yeon-koung, I also competed in international tournaments since I was little. So I’m very well aware of how the fans’ attention to volleyball has changed. As we played well at the London and Rio Olympics, the interest for the sport increased. But before that, it wasn’t popular. I realized that by playing at a qualifying tournament for the Tokyo Olympics. I felt proud by watching the fans and the number of reporters visiting the Athletes’ Village and showing up at the airport. We have to maintain the popularity of volleyball so our younger players can train at better facilities. This is the reason why I have to work harder.