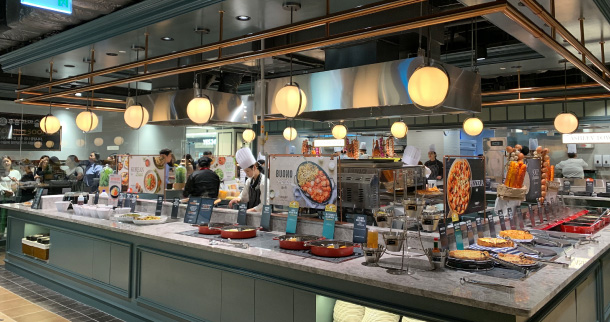 North American-themed restaurant chains popular with families are suffering as dining trends change and customers look for something new and more exciting.

The Seven Springs vegetarian-friendly buffet chain will close its final branch at the end of this month, 14 years after it was acquired by Samyang F&B, a subsidiary of Samyang Holdings. Outback Steakhouse is up for sale, four years after asset management firm SkyLake Investment acquired the Korean unit of the Australian-themed restaurant chain. SkyLake plans to start the bidding in summer and complete the process within this year. CJ Foodville cut down the number of its VIPS restaurants by 34 percent over the past two years.

The shrinking of the Korean family also contributed to the restaurants’ decline - along with better things to do at home, like watching Netflix.

Samyang decided to shut down Seven Springs earlier this year because it was losing money.

At its peak in 2014, Samyang operated 26 Seven Springs restaurants. Last year, only four were operating. This year, the penultimate branch in Mok-dong in western Seoul was shut on April 19. The last branch in Gwanghwamun in central Seoul will close April 30.

“Seven Springs’ profitability suffered due to the changed dining trends and the economic slowdown,” said Lee Sang-jun, a spokesperson from Samyang Holdings. “The decision wasn’t affected by the coronavirus, but was made in response to a decline in popularity of buffets. We’ll focus on profitable businesses.” 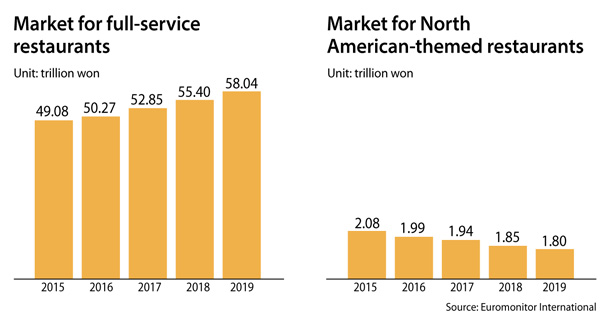 Other companies like their restaurant businesses because of a synergy effect they bring to other businesses.

Its goal was to strengthen the business centering on buffet chains. Ashley and Pizza Mall are some of its buffet restaurant brands.

“Considering the group’s size, revenues from the restaurant business is comparatively small,” said Hwang Woo-il, a spokesperson for Eland. “But when dining is offered near fashion or retail outlets, it creates a synergy effect.”

The key to the restaurant business these days is to offer premium service.

Eland started expanding its premium Ashley Queens stores early this year. It currently operates 14 Ashley Queens, where 200 dishes are offered, compared to the usual 50 to 70.

It also started making meals for the home under its restaurant brands, which is still in its initial phase. Meals like Ashley chicken and fried rice are offered by online malls like SSG.com.

VIPS is adopting a similar strategy.

Since 2018, VIPS reduced its number of restaurants from 61 to 40. At the same time, it is customizing restaurants to the neighborhoods they are in.

Its restaurant in Myeong-dong in central Seoul specializes in beers to cater to the young people in their 20s and 30s working nearby. The restaurant offers 20 types of imported beers, and customers aren’t required to pay for the salad bar, unlike in other VIPS restaurants. The restaurant in Daegu’s Dalseo District offers an ice cream bar, targeting families with kids.

“The dining business isn’t very profitable for CJ, but it continues the operation because it helps the company observe what kinds of food people like,” said an analyst of the company. “But the problem is that CJ is doing it even at the sacrifice of profitable business like the cafe Twosome Place.“

The rise of new customs played a key role in the decline of the family restaurants.

Koreans used to go to family restaurants to celebrate special events like birthdays or graduations. Now, there are alternative places to celebrate - all advertised on social media like Instagram.

“Increased competition including specialized Italian restaurants and cafes that serve food have depreciated the value of family restaurants that failed to offer any kind of special value to customers over time,” said Chung-Ang University economics professor, Lee Jung-hee. “The desire to post pictures on social media has made people search for places that are unique,” said the analyst.

The restaurants have also discovered that competition can come in various forms, not just other brick-and-mortar eateries.

Entertainment services such as Netflix and webtoons have hurt family restaurants because people just don’t have the time anymore. People find the idea of spending several hours in a single location a “hassle,” according to Seo Yong-gu, a professor of business administration at Sookmyung Women’s University.

“The prevalence of entertainment services has reduced people’s absolute time to spend at a restaurant with their family,” said Seo.

The market size of digital streaming services, including Netflix, in Korea skyrocketed to 2.22 trillion won last year from 1.43 trillion won in 2014, up 55.24 percent, according to data from Euromonitor International.

Economic development has also reduced demand for family restaurants, many of which are buffet.

Smaller households also have less appetite for buffets, and many order food in from delivery platforms like Baemin.

“In an age when three- or four-person households are collapsing, family restaurants are against the trend,” added Seo.

“Restaurant owners can’t enjoy profits in a downsizing market no matter how hard they try.”