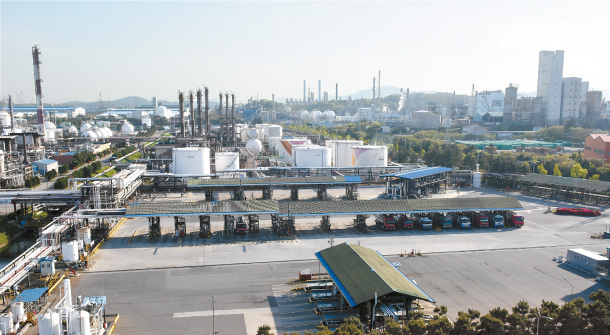 SK EnergyĄŻs inland shipping point at the Ulsan Complex is less than half full. The oil refiner lowered its operating rate to 85 percent last month as the refining margin fell below zero in the third week of the month. The company is considering lowering its operating rate to 60 to 70 percent in June and July. [SK ENERGY]

By April 10, the floating roofs on the crude oil tanks could rise no higher. The 34 massive storage units at SK Energy’s Ulsan Complex were full, quite literally, to the brim.

“There’s an oil tanker scheduled to arrive in two days, but there’s nowhere to store the crude oil. It will need to wait on the sea for about a month - that alone will cost about 1.5 billion won [$1.2 million],” said Jeon Gil-bae, a director of SK Energy’s production management office.

The world is awash in oil as Covid-19 brings economies to a halt, and as the producing nations continue to pump out the commodity apace. Nobody wants the stuff, because it is expensive to store, so much so that those obligated by contract to take delivery sometimes can’t even give it away.

Korea is in the same boat. While it has made it through the coronavirus crisis in better shape than perhaps any other economy, it is still awash in black gold and is struggling to find vessels in which to stash the oil.

The optimum inventory level at SK’s Ulsan Complex is about 8.5 million barrels. On a recent day, it was already holding 12 million barrels, the company said. Considering that some units are being serviced, the complex is effectively at peak inventory.

The government provided the company with space to hold 1.8 million barrels in Seosan, South Chungcheong, but that was only a drop in the bucket.

“That doesn’t help much,” a company executive said. “Oil tankers have to wait at the sea, which costs 50 million won to 100 million won per day depending on the size of the ship.”

SK Energy lowered its operating rate to 85 percent in March because the refining margin - the difference in value between the products produced and the value of the crude oil used - fell below zero in the third week of that month.

For Korean refiners, more than 60 percent of total sales are exports.

“We will have to lower the operating rate to the 60 to 70 percent range in June and July when the effect of reduced exports is in full swing,” Baek Boo-ki, head of the Ulsan Complex’s external cooperation division, said.

SK Energy’s inland shipping point, which should be packed with trucks loading gasoline, diesel, liquefied petroleum gas (LPG), aviation fuel and asphalt, was quiet on a recent day. Three hundred to 500 tank trucks were loading up daily before the coronavirus outbreak. That number recently dropped to between 150 and 200, according to an SK Energy executive.

Offshore, only one ship could be seen at one of the five docks.

“I’m worried the pier might be completely empty in a couple of months,” said Jeon. “Buyers have the right to ask to increase or reduce the actual load by about 5 percent of the contract. These days, the only requests we receive is for reductions.”

Among the products, jet fuel is of the most concern. The high value-added hydrocarbon is about 14 percent of production for local refiners, and with planes and entire airlines grounded, demand was down 70 percent in March from usual. SK Energy is shifting production at its jet fuel facilities to make other products.

The same goes for crackers processing bunker C, or residue oil, to more value-added products, like gasoline, diesel and kerosene. Before the pandemic, these crackers always ran at 100 percent due to the profitability of the output. SK expects this figure to reach around 70 percent by June.

“It is the first time in three decades that the company lowered the cracker’s operation rate for reasons other than repairs or accidents,” Jeon said.

Refiners are betting on crude oil production cuts, but the situation is not looking good. OPEC+, the 11 members of the Organization of Petroleum Exporting Countries plus 10 others, recently agreed to reduce output by 9.7 million barrels a day, but this is not a significant amount - last year the world produced about 80 million barrels a day.

Sharp drops in crude oil prices are leading to paper losses on the inventory of refiners. The product sitting in tanks is worth less than when it was purchased. With Dubai crude prices down more than 50 percent from late February, hundreds of billions of won of value may have vanished.

Oil refiners are on emergency footing, cutting production and reducing capital investment. GS Caltex and S-Oil are front-loading maintenance, while S-Oil, which has been running below 80 percent since the beginning of this year, is considering its first voluntary retirement program.

The industry is looking for government support. It wants a temporary suspension of the 3 percent tariff on oil imports and a reduction in oil import surcharges. Local refiners claim surcharges on oil imports - which are not imposed on LPG imports - are discriminatory. They are also advocating changes to individual consumption taxes and value-added taxes.

Korea has zero oil deposits and is highly dependent on crude oil imports. Despite its lack of oil fields, the country was ranked the world’s sixth-largest oil refiner in 2017 and the world’s eighth-largest petroleum product consumer in 2018. Even if crude oil prices fall, as long as the list of taxes remains the same, the price of gasoline and diesel at the consumer end will not fall significantly.

The Ministry of Economy and Finance says any reform, even temporary, will not be easy because of the impact on revenue.

“Every refiner in the country is working to boost their lobbying activities, but it’s not easy for industry players to be blunt enough to push demands,” said an industry official.

The recent landslide victory of the ruling Democratic Party of Korea - considered left-wing - is one reason lobbying will be such a challenge.

“If the government only gives passive support just because oil refiners are large companies, a massive key industry will be impacted,” an industry official said.

Responsible for 2.1 percent of Korea’s GDP, the oil refining industry is ranked third after semiconductors and automobile.