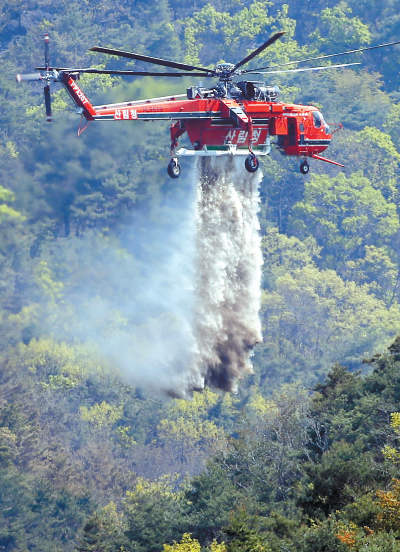 A helicopter douses a fire on a mountain in Andong, North Gyeongsang, on Sunday. The Korea Forest Service and North Gyeongsang Provincial Government mobilized 32 helicopters and 215 fire engines on Sunday to put out the forest fire which started Friday afternoon. [YONHAP]

A blaze tore through the mountains of Andong, North Gyeongsang, over the weekend, burning nearly 800 hectares (1,977 acres) in 40 hours.

No casualties were reported, and North Gyeongsang officials said damage appeared minimal, with just three houses and a few agricultural facilities, such as warehouses and greenhouses, burned.

Most of the 1,200 people who were evacuated after the fire was first detected Friday had returned to their homes by Sunday afternoon.

The cause of the blaze remains unknown. Firefighters said Sunday they plan to begin an investigation soon.

It appears the fire began at around 3:40 p.m. last Friday on a small mountain in Ingeum-ri, Pungcheon-myeon in Andong, about 190 kilometers (118 miles) southeast of Seoul, according to North Gyeongsang officials.

The blaze started to spread and seemed to die down by Saturday daytime, before gale-force winds fanned the flames back up again. It ultimately took nearly 30 firefighting helicopters - which carried large buckets of water - and 3,700 firefighters, soldiers and local government officials to extinguish the flames by around 2:30 p.m. Sunday.

Andong residents who lived nearby were told to evacuate their homes Saturday and seek refuge at public facilities in the vicinity, including community and welfare centers.

Highways and railways in Andong were also closed at one point as the blaze moved their way Saturday, but they all reopened Sunday morning.

Minister of the Interior and Safety Chin Young visited Andong past midnight Saturday to get updates on the firefighting measures from Andong Mayor Kwon Young-se and the minister of the Korea Forest Service (KFS), Park Chong-ho.

Later on Saturday, Prime Minister Chung Sye-kyun’s office said in a statement that Chung was also briefed about the fire from Park and ordered him to make sure not to let his guard down until the blaze was completely doused.

Chung was quoted by his office as thanking the KFS and Andong and North Gyeongsang officials and firefighters for their efforts in fighting the wildfire, and especially for saving the Andong Hahoe Folk Village and Byeongsanseowon Confucian Academy - both Unesco World Heritage sites - from any damage.

Chung warned hikers about forest fires, urging them not to take any inflammable items with them to the mountains and practice social distancing to prevent Covid-19 infections.

The Andong blaze came nearly a year after a huge wildfire ripped through the mountainous northeastern province of Gangwon last year on April 4, killing two and leading to the evacuation of more than 4,000 residents.

Some 640 homes were destroyed, and thousands of firefighters from all over the country were mobilized to battle the flames. The fire was extinguished two days later on April 6.

After separate fires began in Inje County, Goseong County and Gangneung, flames spread to the nearby cities of Sokcho and Donghae, burning 2,872 hectares of forest in total.