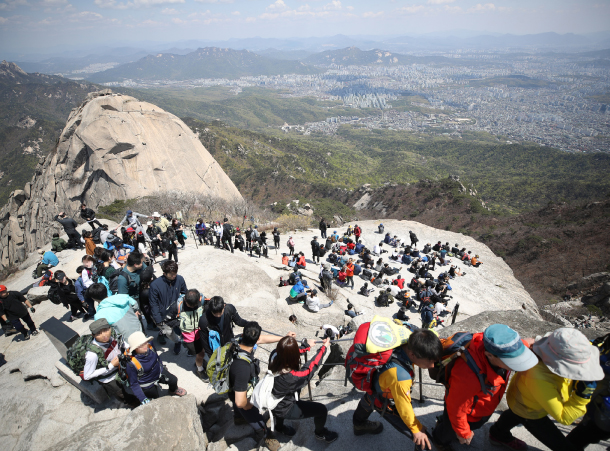 Hikers flock to Baekun Peak at Mount Bukhan in Seoul on Sunday, a week after the government eased the four-week “high-intensity” social distancing campaign. [YONHAP]

Local health authorities warned against lax social distancing as several national holidays near, stressing that “carelessness” is the biggest threat to preventing a second possible wave of the coronavirus.

The stern warning over the past weekend came as many people in Korea have begun to leave their homes after weeks of self-quarantine and amid growing signs that the outbreak is finally under control here.

With three holidays coming up in the next two weeks, health officials said they fear people may use the occasions to travel around the country and flock to popular tourist destinations, overlooking chances of mass infections.

Buddha’s Birthday is this Thursday, May Day on Friday and Children’s Day on May 5, meaning that if workers take next Monday off, they can take off six days in a row.

Plane tickets to Jeju Island, on the southern tip of the nation in the South Sea, are mostly sold out for the weekend, and many hotels and golf courses on the island have also reported increased reservations.

Kwon Jun-wook, director of the National Institute of Health who’s part of Korea’s command center for the pandemic, said Saturday in a press briefing that about 30 percent of worldwide Covid-19 infections traced to a cluster were asymptomatic patients, which is why such “silent transmissions” are so dangerous and easy to morph into a huge hot spot.

“Carelessness is the biggest, most dangerous sign to our response to Covid-19,” said Kwon. “An explosive outbreak can begin in a split second, so everyone should follow health guidelines and keep practicing social distancing,” he pleaded.

Korea added 10 new infections throughout the country Saturday, the same as on Friday and a bit higher than the six infections counted last Thursday, according to data from the Korea Centers for Disease Control and Prevention (KCDC). The total case load now stands at 10,728.

As of Saturday midnight, 242 people had died, while 8,717 people have been declared fully recovered.

Of Saturday’s 10 new infections, nine were imported cases. Among Korea’s 10,728 total, 1,037 patients, or about 9.7 percent, contracted the disease while overseas, mostly in Europe or the United States, KCDC data showed. Tour operators in Jeju said Sunday they expect to see about an average of 25,500 people arrive in Jeju each day from Wednesday to May 5, far higher than the number that arrived since the pandemic, about 13,000 people on the weekdays and 16,000 people on the weekends.

From Feb. 23 to April 11, about 747,000 people arrived in Jeju, down 60 percent from the same period last year. Feb. 23 is when the Korean central government kicked off a four-week “high-intensity” social distancing campaign that strongly advised members of the public not to leave their homes.

Worried that the travelers may spread the disease in local communities, Jeju said many of its indoor public facilities such as museums will remain closed. Jeju has counted only 13 infections so far, the fewest out of all of the provinces in the nation.

A Jeju official Sunday warned visitors to wear face masks at all times and not to come if they have recently been to a foreign country.