Doosan Bears’ pitcher has a serious point to prove

Doosan Bears’ pitcher has a serious point to prove 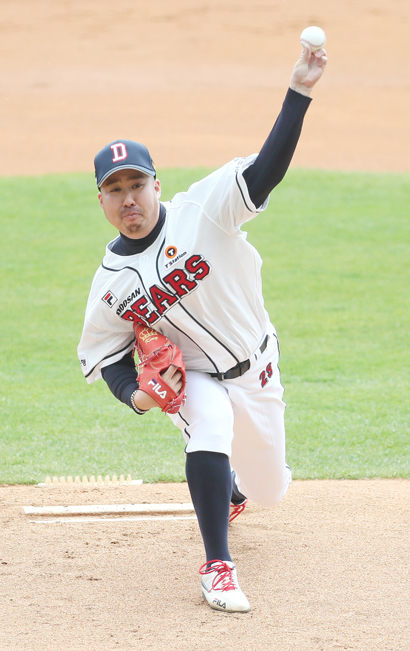 Yoo Hee-kwan of the Doosan Bears throws a pitch during a preseason game against the Kiwoom Heroes at Jamsil Baseball Stadium in southern Seoul on April 22. [YONHAP]

Doosan Bears’ pitcher Yoo Hee-kwan has been working harder than ever before to make sure his 2020 season will be the “best of his career.”

Part of this hard work includes dropping from 99 kilograms (218 pounds) to 94 and slowly getting his condition on track for the KBO’s new official starting date, May 5, which is also Children’s Day in Korea.

Since the KBO allowed clubs to play practice games against each other starting April 20, Yoo got to put his hard work into action during the Bears’ game against the Kiwoom Heroes on April 22 at Jamsil Baseball Stadium in southern Seoul. His determination and dedication throughout winter and spring training seems to have paid off as he only gave up two hits and a walk throughout five innings, while striking out five batters. He only needed to toss 67 pitches for five innings.

“Although I’m the fifth starter in the rotation, in my mind, I’m the ace,” Yoo said.

However, his poor performance didn’t concern the club’s manager Kim Tae-hyung who said during spring training that “his pitching balance is good. He’s in great condition.”

And Yoo validated Kim’s confidence once the preseason games started.

This season, Yoo is set to be the fifth starter in the starting rotation. It’s likely that the Bears’ starting rotation will lead with two foreign pitchers - Raul Alcantara and Chris Flexen - followed by Lee Young-ha as third starter.

“Even when I picked up a lot of wins, the title of the team’s ace went to Dustin Nippert or Lee Young-ha,” Yoo said. “But in my mind, I believe that I am the ace.”

Yoo’s stats are good enough to back up his belief.

Back in the 2015 season, he picked up 18 wins and five losses with a 3.94 ERA, but the Bears’ former foreign pitcher Nippert was considered the ace, despite having less impressive statistics. That season, Nippert struggled from injury and ended up finishing by picking up six wins and five losses with a 5.10 ERA. However, as Nippert made his comeback in the postseason and led the Bears to win the Korean Series, Yoo’s performance in the regular season was forgotten.

In addition, Yoo has managed to pick up 10 wins or more for seven consecutive seasons since 2013, but the title of the “Bears’ ace domestic pitcher” went top Lee Young-ha, who is 11 years younger than Yoo. Lee rose to stardom after the 2018 season, where he picked up 10 wins and three losses with a 5.28 ERA. Last season, Lee not only secured his spot in the Bears’ starting rotation but was also recognized as part of the next young generation of pitchers in the KBO, by picking up 17 wins and four losses with a 3.64 ERA.

Despite Yoo’s outstanding and impressive statistics over the past seven seasons, his performance may not have received as much attention as it deserved because of the speed of his pitches. More than his statistics, Yoo is better known as the player who throws the slowest pitches in the KBO.

His average fastball speed is 130 kilometers per hour (81 miles per hour), and because of this, Yoo likes to mix up breaking balls like sliders, curves and sinkers in his pitches. For a starting pitcher, picking up 10 wins or more without having a fastball is quite an impressive achievement, but the fans sometimes makes fun of him by calling him the “aesthetics of slow.”

“I don’t really care about not being able to throw fastballs,” Yoo said.

In the 2019 season, Yoo picked up 11 wins and eight losses with a 3.25 ERA throughout 28 games to help the Bears win both the regular season and the Korean Series.

He’s once again set his goal for this season as picking up 10 wins or more. If he does, he will become the second left-handed pitcher in KBO history, after Jang Won-jun also of the Bears, to pick up 10 wins or more for eight consecutive seasons.

Including right-handed pitchers, the longest streak is 10 consecutive seasons, set by the KT Wiz’s current manager Lee Kang-chul, who set the record from 1989 to 1998.

“If I pick up 10 wins, I’ll tie the record for left-handed pitchers and be able to have my name at the top, right next to one of the best pitchers in the KBO,” Yoo said. “If possible, I want to challenge myself to beat manager Lee Kang-chul’s record, too.”